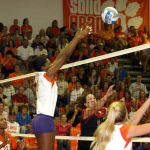 CLEMSON, SC – Coming off of two straight sweeps against ACC opponents, the Tiger volleyball team will look to extend its five-match winning streak this weekend. Clemson (10-4, 5-1 ACC) will play host to NC State (2-14, 0-7 ACC) on Friday night. The match is slated for a 7:00 pm start-time and is scheduled to be video streamed over the Internet. Fans can access the broadcast on www.accselect.com or by clicking on the video streaming link on www.clemsontigers.com.

North Carolina (4-12, 2-5 ACC) will make the trip to Jervey Gym on Saturday evening, as the Tigers and Tar Heels will battle at 6:00 pm. Both matches will also be available on livestats via the Clemson Athletic Department home page.

A pair of Clemson players are atop the ACC in respective categories. Danielle Hepburn’s .371 hitting percentage leads the second-place hitter by 0.22 points, while Jeannette Abbott is averaging a league-best 4.41 kills per game.

Hepburn is also ranked 10th in the nation with a 1.63 blocks per game average. The sophomore from Miami, FL recorded 14 total blocks last weekend to bring her season total to 83. Freshman Kesley Murphy has a team-best 365 set assists, while fellow rookie Didem Ege leads the Tigers with 231 defensive saves.

Scouting the Wolfpack N.C. State and first-year head coach Charita J. Stubbs enter the fourth week of the ACC season still looking for their first conference victory. The Wolfpack has dropped all seven of its previous ACC matches and has won just two of 14 matches overall.

Sophomore Keshia Raibon leads the team with 162 kills while Chrissy Zirpolo, a freshman outside hitter, is a close second with 148 kills on the year. Zirpolo also owns a team-best 126 defensive saves, with Raibon not far off with 121. As a team, the Wolfpack is averaging 12.09 kills and 2.11 blocks per game with 90 total service aces.

Clemson vs. NC State, The Series The Tigers have won 16 straight matches over NC State to take a 28-17 lead in the series that includes a 15-4 record in mathces played in Clemson, SC and a 13-9 mark in Raleigh, NC. Clemson won both contests during the 2005 season, a 3-2 victory on the Wolfpack’s home court and a 3-1 decision at Jervey Gymnasium. NC State’s last win was a 3-2 victory in Raleigh during the 1997 season.

Scouting the Tar Heels North Carolina owns a 4-12 overall record with a 2-5 mark entering the fourth week of conference action. The Tar Heels will take on Georgia Tech on Friday night in Atlanta, GA before their stop in Tigertown on Saturday.

Noelle Dyk, a freshman outside hitter, leads the squad with 147 kills and fellow freshman Christine Vaughen boasts a team-high .288 hitting percentage. Senior Amy Beaver has totaled 64 total blocks this season for a 1.19 block per game average, while Brianna Eskola ranks first on team with 249 digs. The Tar Heels have posted 80 service aces in 2006, led by Bekah Brinkley’s 15. North Carolina is averaging 13.15 kills per game, while blocking 2.44 attacks per game.