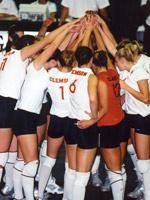 CLEMSON, SC – The Tiger volleyball team will play host to in-state rival South Carolina on Sept. 9 in Jervey Gym. The first 500 fans will receive a Solid Orange It’s About Pride t-shirt. The match is scheduled to begin at 7:00 p.m.

Junior Lori Ashton leads the Tigers with 98 kills and a .292 hitting percentage. The middle hitter leads the team at the net with 40 blocks (11 solo) and a 1.48 blocks per game average. Junior Leslie Finn has 82 kills and 63 digs, while Beasley has talllied 65 kills and 27 blocks (one solo). Freshman Liz Beckham has added 63 kills with 76 digs, and senior Lindsey Abbott has a team-best 102 digs with a 3.78 digs per game average. Sophomore Carly Hill has served up a team-high five service aces, and junior Stephanie Haskell has handed out 184 assists. Freshman Dawn Robertson has added 83 assists with four service aces.

The Tigers and Gamecocks last met in 2002, as Clemson lost a five game thriller, 3-2 (30-22, 30-16, 25-30, 23-30, 15-4) to then-23rd-ranked South Carolina at the Volleyball Competition Facility in Columbia. Clemson dropped the first two games before rallying to win games three and four. South Carolina outhit the Tigers in the decisive game to win the match. Ashton led the Tigers with a match-high 16 kills and three blocks. Finn and Beasley tallied 15 kills each, and Marija Zoric led the team at the net with five blocks.

Admission is free to all home matches in Jervey Gym.