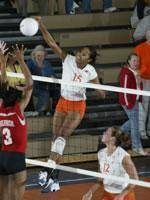 CLEMSON, SC – The Clemson volleyball team won the Clemson Invitational tournament this weekend, defeating The Citadel and falling to Winthrop on Saturday. The Tigers won matches against Western Carolina and preseason 21st-ranked Northern Iowa on Friday to post a 3-1 record for the tournament. Clemson senior Lori Ashton was named the tournament’s Most Valuable Performer, while senior Leslie Finn and sophomore Anna Vallinch were also named to the all-tournament team. Clemson improves to 4-1 on the season, which is the team’s best start since the 1999 season.

The Citadel was led by Samantha Parasi, who posted 10 kills in the match. Melissa Fridinger tallied 11 defensive saves for the Bulldogs. Setter Katie Livingston paced The Citadel with 23 assists and Parasi added one block solo in the match.

The Tigers fell to Winthrop in a five-game heartbreaker on Saturday afternoon by a score of 3-2 (32-30, 20-30, 30-27, 27-30, 15-11). Clemson was led by Finn, who posted a double-double with 28 kills and 19 digs. Ross posted 20 kills and Ashton recorded 13 kills for the match. Vallinch paced the team with 24 defensive saves and Meghan Stanton added 10 digs for the Tigers. Haskell dished out 34 assists for Clemson, while Lawrence contributed 27 assists. Ashton posted six blocks (one solo), while Meghan Steiner also recorded six blocks.

The Eagles were led by Tori Grafeman with 23 kills and 15 digs in the match. Mary Hock also recorded a double-double with 13 kills and 22 digs for Winthrop. Sarah Billingsley led Winthrop with 29 defensive saves. Setter Emily Heckl handed out 60 assists for the Eagles. Shannon Sitzmann notched eight blocks (one solo) and Taryn Surbaugh added six blocks.

The Tigers return to action on Tuesday as they travel to Columbia to face in-state rival South Carolina. The match between Clemson and the Gamecocks is scheduled to begin at 7:00 p.m. and will be held at The Colonial Center in Columbia.