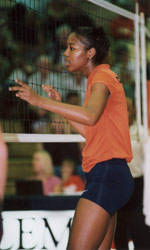 CLEMSON, SC – The Clemson volleyball team defeated NC State 3-0 in ACC action this afternoon at Jervey Gym. With the win, the Tigers improve to 13-7 overall and 4-1 in the league, while the Wolfpack falls to 2-18 overall and 0-3 in conference play. The Tigers have won 10 of their 11 home matches this season, and have claimed nine of their last 10 contests.

Lori Ashton led the Tigers with 17 kills and a .538 hitting percentage along with two blocks and a service ace. Marija Zoric posted double-figure kills with 12 and a .524 hitting percentage. She also led the Tigers at the net with five blocks. Jessi Betcher handed out 39 assists with 10 digs, while Leslie Finn had six kills with two service aces. Carly Hill added three aces and Stephanie Haskell had 12 digs, while Sarah Gardner and Ryane Beasley had an ace each. As a team, Clemson hit .305 for the match with nine service aces and eight blocks (two solo).

NC State was led by Maya Mapp’s 11 kills and a .400 hitting percentage. Lindi Sheppard had 27 assists, and Casey Watt and Melanie Rowe tallied nine digs each. Mapp and Ensminger led the team at the net with two blocks each. The Wolfpack hit .139 as a team with four aces and four blocks.

Clemson won the first game 30-25 behind Ashton’s seven kills and Zoric’s three blocks. The Tigers hit .211 for the game, while the Wolfpack recorded a .146 hitting percentage. Mapp and Wyatt led NC State with four kills each.

In game two, the Tigers hit .467 with four service aces, while holding NC State to a -.100 hitting percentage in the 30-12 win. Ashton and Zoric had six kills each, and four Clemson players tallied aces.

NC State outhit the Tigers in game three, .367 to .323; however, Clemson won the final game 30-24. Ashton had four kills with a service ace and Carly Hill served up two aces to push her season total to 36.

The Tigers return to action on Fri., Oct. 11 as Clemson plays host to Georgia Tech at 7:00 PM in Jervey Gym. Admission to all home volleyball matches is free to the public.