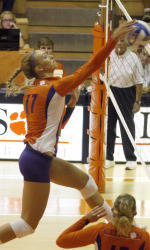 Tiger Volleyball Storms Past Furman, 3-0, on Wednesday in Clemson Classic

Alexa Rand led Clemson for the second straight match, registering 11 kills with no errors and a .611 hitting percentage, while also getting in on six blocks. The junior is coming off an MVP performance in the College of Charleston Classic when she had 36 kills in three matches and hit .500.

The Tigers has a season-best 13.0 blocks, seven of which were solos. This helped Clemson to hold the Paladins to .111 hitting for the match, and no higher than a .194 mark, which came in a tight second set.

Hannah Brenner led the Tigers with 23 assists, while freshman Kristin Faust had eight kills and seven digs. Natalie Patzin had nine digs to lead the Tigers, and Mo Simmons finished with six kills and no attack errors in 11 chances. Freshman Karis Watson had three kills and three blocks on the evening as well.

Clemson was on fire in the first set, hitting a blistering .654 offensively, with 17 kills and no errors in 26 swings. Defensively, Clemson was able to side out on all 14 of Furman’s serves, meaning the Tigers did not surrender consecutive points at any juncture in the set. Clemson went on to cruise to a 25-13 set win, led by Rand and Adeleye, who had five kills apiece.

Clemson came back down to Earth with a .267 hitting mark, and Rand again led with five more kills. The Tigers also had five blocks in the set, including three of the solo variety from Adeleye.

Furman took a 4-0 lead in the third set, but Clemson was able to take a one-point edge at 9-8 on a Paladin attack error. Clemson continued on a run, scoring six of the next seven to take a 16-10 lead. Furman pulled to within one at 17-16, but could get no closer as Clemson scored four straight, and closed the set, 25-20.

Friday’s match will be student appreciation night. The first 100 students will receive a free t-shirt, and the match is worth double participation points on the frequent fan card.