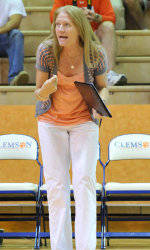 Tiger Volleyball Set to Hold Orange and White on Friday

CLEMSON, SC – Clemson volleyball fans, among the most loyal in the nation, will have the opportunity to see the 2011 Volleyball team in action as they hold their Orange and White Scrimmage on Friday at 5:00 pm in Jervey Gymnasium. All home regular season events will be free to the public and students alike.

Head Coach Jolene Jordan Hoover will run her 14-member squad out off a team that finished 18-13 a season ago and returns all seven starters. Hoover is in her 19th season at Clemson, and holds a 378-208 mark at the school. Hoover had coached the Tigers to eight NCAA trips in her career, and three in the past four seasons.

Returning for the Tigers is All-ACC middle hitter Sandra Adeleye on the front line, as well as ACC blocking leader Alexa Rand, who finished 8th nationally in blocking a season ago.

As a team, the Tigers have led the ACC in blocking each of the past three seasons, and with a tough front line of Adeleye, Rand, and sophomore Mo Simmons, the Tigers will again be tough defensively.

Adeleye led Clemson with 407 kills a season ago, and Serenat Yaz, who was second on the team in kills (379) and digs (415) last year, are each juniors poised to lead the attack again.

Also back is libero Cansu Ozdemir, who was able to stay and extra year after taking a redshirt from her first season, when she did not appear in a match due to injury.  Ozdemir graduated in May and will play her final season as she pursues a master’s. Ozdemir’s 527 digs in 2010 ranked 8th on the all-time Clemson list for a single season.

Mo Simmons had a great summer of volleyball, traveling to Peru with the USA Junior National team, starting and playing in four matches. Simmons, just a sophomore, was voted a captain of the team for this season, along with Ozdemir and junior Natalie Patzin, who was third on the team in kills last season and has 515 kills and 526 in her career.

Freshman All-ACC selection Hannah Brenner has been in competition with USA A-2 Junior National Team member Kamryn Sherman, who enrolled in the spring. Sherman and Brenner will both likely see a lot of time.

Clemson’s other freshmen, Krisitn Faust, and Karis Watson, will be fun to watch in their first seasons as well, and will be difficult to keep off the court. Faust is an athletic 5-9 outside hitter, and Watson is a tremendous leaper, and at 6-2, will help at a couple of spots.