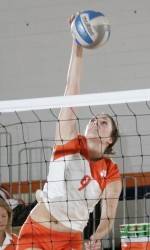 The Tigers rebounded from a loss in the first game to claim the second, third and fifth frames for their 18 overall victory of the season. Clemson is now 18-9 overall with a 13-6 record against ACC opponents, while Maryland dropped to 11-17 overall and 4-15 in the league.

Also posting double-figure kill totals for the Tigers were Jeannette Abbott with 21 and Meghan Steiner with 18. Freshman setter Kesley Murphy also recorded a personal best with 73 assists against the Terps.

Game one saw 15 lead changes with the last occurring as the Terps scored four straight points to take a 17-14 advantage. The Tigers were able to tie the score at 24 apiece after a three-point run and knotted it again at 25-25 and 26-26 before Maryland posted three points in a row. Clemson avoided the game point, as Mansfield recorded a kill and Hepburn and Lia Proctor blocked a Terp attack, and rallied for its own 29th point. However, Maryland scored the final two points to win the game 31-29.

The Tigers responded with wins in games two and three to take a 2-1 lead in the match. Game two was another tight frame as Maryland led 22-19 late in the game. With the Terps ahead at 25-23, Clemson rallied to go ahead 28-25, scoring two points on service aces by Didem Ege. Maryland then tied the score at 28-28 with its own run before the Tigers closed out the game on kills by Hepburn and setter Kelsey Murphy.

Clemson started strong in the third game, leading 16-7 early on. The Tigers then extended their edge to 11 points at 21-10, but the Terps put together five straight points of their own to come with six. Clemson went on to clinch the game by a 30-21 margin.

Maryland rebounded with a victory in game four. The Tigers rallied for eight straight points to take a 12-9 lead early in the frame, but a five-point Terp rally put them ahead 17-14. The score remained tight until another Maryland rally gave it a 29-25 advantage. The Terps then won the game, 30-28, to force the fifth.

After Maryland took a 5-2 lead in the deciding game, Abbott and Mansfield posted two kills apiece to Clemson on top. The Tigers then took a 12-8 lead after three straight Hepburn kills and then claimed the game by a 15-11 score, winning on a service ace by senior Dawn Robertson.

Clemson will take on Boston College on Saturday night. The teams will begin play at 6:00 pm at Jervey Gym.