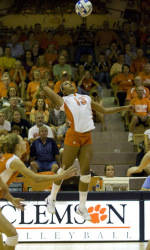 CLEMSON, SC (clemsontigers.com) – The Clemson volleyball team (7-2) will host the Clemson Classic on Friday and Saturday, welcoming #17 Michigan State (9-0), Furman (6-1) and Presbyterian College (4-6) for the two-day event. Michigan State is the first ranked opponent to visit Clemson during the regular season since the Tigers defeated #14 Duke, 3-1, in 2007. All matches will be available on gametracker.

Furman and Michigan State will get the action started on Friday morning at 11:00 am in Jervey Gym followed by the Tigers and Blue Hose at 1:00 pm. Furman and PC square off at 5:00 pm, setting the stage for the showdown between Clemson and #17 Michigan State, which is slated to begin at 7:00 pm. The Tiger-Spartan meeting is Public Service Appreciation night.

On Saturday morning, fans are encouraged to watch Clemson and Furman play at 10:00 am in a local matchup. The match begins shortly after Tiger Walk, and is only a few steps away. Michigan State and PC close the tournament at noon or following the completion of the Tiger-Paladin match.

As a reminder to fans wishing to attend the Saturday matches, due to football parking restrictions, those without assigned football parking are encouraged to park for free at the Walker Course general lot, or to park at the Clemson Beach area (formerly YMCA). The cost to park at the beach is $10.00, but includes free shuttle service to and from the area, and is handicap accessible.

The Tigers own a combined 38-1 record against the Clemson Classic field. The main attraction are the Michigan State Spartans, who are ranked 17th in the nation and hold a 9-0 mark. The Tigers and Spartans have met just once in history, a 3-0 Clemson win in 1999 in East Lansing.

The Tigers have a 34-1 all-time record against the Paladins. However, the Paladins’ only win came in the Tigers ACC Championship season, winning 3-2 in the 2007 Big Orange Bash.

Clemson has won all three previous meetings with the Blue Hose, but the most recent meeting was in 1986.

The Clemson Classic is the fourth and final tournament for the volleyball team before they get into conference play. The ACC regular season starts on Sept. 25-26 when the Tigers host North Carolina and NC State.