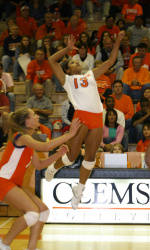 For her performance in the event Proctor earned her first all-tournament selection of her career. The junior from Inman, SC led the team with 42 kills in the three matches and also tallied 28 digs and seven blocks. Senior Danielle Hepburn was named to her second all-tournament team of the season after recording 28 kills and 20 blocks.

Just hours after their best offensive performance of the year, the Tigers (4-2) turned in their lowest hitting percentage against Northern Iowa. Proctor matched her season high with 16 kills and recorded the first double-double of her career with 16 digs as well. Hepburn had 10 kills and eight blocks for the nightcap, while Didem Ege tallied 19 defensive saves.

Tournament MVP Amy Sampson led all hitters with 18 kills for the Panthers (6-0).

Northern Iowa edged Clemson in the first set, 25-23, limiting the Tigers to just one significant run. The visitors rallied for six straight early on for a 10-5 lead, but the Panthers responded with four straight points of their own and then caught up at 14. With the score knotted again at 19 apiece, Northern Iowa posted the next three points, which proved to be the difference.

Clemson came out strong in set two, using another early run to gain a 12-5 advantage. The Panthers, due in large part Sampson’s offense, mounted a late rally to come within one at 23-22. However, a kill by Brittany Fennell returned the serve to Tigers and a UNI error accounted for the final point of the set to tie the match at 1-1.

The Panthers struck first in the third set with the first two points and Clemson played catch-up for the early part of the set. After the Tigers tied the score at 11-11, Northern Iowa responded with five straight points. The Panthers then held on for the 25-22 win. An eight-point run on the tough service of Jessa Benson gave the Northern Iowa a 16-12 advantage in the fourth set and Clemson couldn’t make up the deficit. The Panthers went on to win the set, 25-18, and the match, 3-1.

In the first match of the day, Clemson defeated Northern Illinois by a 3-0 (25-17, 25-19, 25-10) as Proctor and Abbott posted double-figure kill totals. Hepburn hit a .444 clip with nine kills in 18 attempts with just one error as the Tigers recorded their highest hitting percentage of the young season at .318.

Clemson used a five-point run on Proctor’s serve midway through the first set to distance itself from the Huskies. Proctor then posted kills for the Tigers’ final three points of the frame as they won, 25-17. Abbott had six kills in the set to lead the Clemson offense. The teams stayed close in the beginning of set two. However, Meghan Hinemeyer served seven straight points to erase a two-point Northern Illinois advantage and put the Tigers on top. The lead stretched to 19-12 after a kill by Hepburn, but the Huskies put together their own run to come within three. Proctor then closed out the second set as well with a kill (25-19).

Clemson held the edge throughout the entire third set, quickly jumping out to a 13-6 lead. The Tigers held the Huskies to just two consecutive points throughout the frame and scored the final five points of the set to clinch the match victory.

Clemson will return to action next weekend as they head to Columbia, SC for the Carolina Challenge. The Tigers will face Winthrop and South Carolina on Friday before concluding the tournament against the College of Charleston on Saturday.