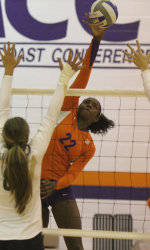 Mo Simmons led the Tigers with 10 kills and four blocks, while Alexa Rand recorded nine kills and eight blocks for the Tigers. Hannah Brenner recorded her second double-double of the weekend, dishing out 35 assists and 12 digs. Kristin Faust came in and played a solid game of the bench, notching six kills and three digs.

The Tar Heels used a 10-2 run to start the match to put the Tigers in a hole in the first set. Then, with the Tar Heels in front 17-7, Clemson put together an 8-2 run to cut UNC’s lead to 19-15. The teams then traded points until the Tigers fought off three set points from UNC to fall 25-21. Clemson tallied 20 digs and three team blocks in set one.

In the second set, the teams traded points and runs early. With the set tied at seven North Carolina went on a 7-3 run to push their lead to 14-10. Clemson then used some errors by North Carolina hitters to go on their own 6-3 run and pull within one. But, the Tar Heels then used an 8-1 run to close out the set and take a 2-0 lead over the Tigers. Kristin Faust and Serenat Yaz each had three kills in the set and Alexa Rand recorded two blocks for the Tigers in set two.

The third set was all Tigers early. Fueled by three consecutive blocks by Rand, Clemson went on a 6-2 run to open the set. The Tar Heels were able to come within two of the Tigers at 11-9, then the two teams traded points until, at 21-19 Clemson, the Tar Heels went on a 6-1 run to take the set 25-22 and the match 3-0.