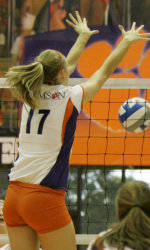 The 20.0 total blocks were the fourth-best single-match mark in school history and second-best of the season.

Sandra Adeleye had 17 kills and hit .371 and recorded six blocks, while Alexa Rand had 12 total blocks and nine kills on the evening. The 12 blocks were her second-best career effort.  The Tigers entered the night ranked in the top ten in the nation in blocking, and the 20 in four sets marked a season-best for a four-set match.

The match was decided by a net total of zero points, as each of North Carolina’s three set wins came by two points, and Clemson’s third set win was by six points.  Serenat Yaz had her eleventh double-double of the season and her eighth in nine ACC matches with 14 kills and 14 digs. Mo Simmons tied a career-high with seven blocks on the night as well.

The Tigers recorded season highs with ten services aces and 13 service errors on the night. Cansu Ozdemir each added two. Ozdemir had a team-high 18 digs, while Rosado had a career-high eight.

Emily McGee led all players with 21 kills for North Carolina, and Kaylie Gibson had a match-high 28 of Carolina’s 89 digs. The Tigers hit .216 and made only 16 attack errors on the night.

The Tigers dropped the first set, 25-23, despite turning away seven blocks and notching 14 kills. The Tigers had a 13-8 lead, and led by as many as three at 21-18 after Clemson’s seventh block. A North Carolina timeout turned the set around, with the Heels going on a 7-2 run to win the set, 25-23.

The Tigers fought back in the third set, again taking a 13-8 lead. This time, when North Carolina tried to go on a run, the Tigers put their foot down and pulled away behind a Yaz kill and a Rand solo block. Rand then put away the final point, giving Clemson the 25-19 win. Adeleye had six kills in the set, and Rand had two kills, to solo blocks, and two block assists.

Clemson again opened a four-point lead in the fourth set at 14-10. A Carolina run tied the score at 17. The Tigers scored the next two, but the Heels responded with three in taking a 20-20 lead. The teams traded points, but with the scored knotted at 24-24, the Heels registered two kills to win the match, 3-1.