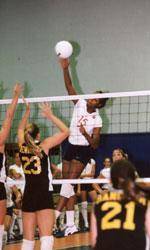 Maryland won the first game 30-21, but Clemson rallied to take a two-game lead, winning the second and third games 30-28 and 30-25, respectively. The Terrapins controlled game four 30-20, then claimed the decisive game 15-10. For the match, Maryland hit .302 as a team to the Tigers’ .283 hitting percentage. Clemson tallied 11 team blocks to the Terrapins’ 10 team blocks, and Maryland served up seven aces to the Tigers’ two.

The Tigers return to action Saturday evening in Jervey Gym as they play host to the Virginia Cavaliers. First serve is slated for 6:00 PM. Admission is free to all Clemson home volleyball matches.