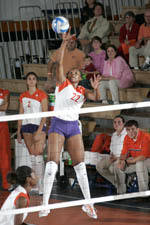 CLEMSON, SC – The Tigers were defeated by Florida State in volleyball action on Friday by a score of 3-1. Clemson dropped to 9-13 overall with a 4-10 record in the ACC, while Florida State now has a 7-15 overall record and a 5-9 mark in conference action.

Brittany Ross played exceptional in the match for the Tigers, as she posted 25 kills on a career-high .447 hitting night. She also recorded two service aces and three block assists as well as tied a career-high with 19 defensive saves. Four Seminole players tallied double-digit kills in the match, with Makini Thompson leading the way with 20 and a team-high .386 hitting percentage.

Florida State bounced out to a 9-5 lead in game one and extended it to 19-14 on an Andreza Santos kill. The Tigers and Seminoles remained neck-in-neck until a service ace by freshman Gabrielle Rivera pushed FSU ahead by five points, 26-21. The Tigers answered back and went on a 3-0 run with strong serving to inch within two points (26-24), but Florida State closed out the game by a score of 30-27.

Clemson responded in game two with a 30-17 win. The Tigers jumped out to an early 14-5 lead, which they never relinquished. Ross had eight kills in the game and the team posted 10 block assists. Clemson held its largest advantage at 22-10 and kept the Seminoles at a distance the rest of the game.

Although the Tigers remained close in the fourth affair, Florida State took a 24-20 lead late in the game. A block and a kill by Seminole players put FSU up, 26-20, and the team raced away with a decisive 30-22 victory.

The Tigers will welcome Miami to Jervey Gym on Saturday, Nov. 5. Clemson and the Hurricanes will take to the court at 5:30 PM. Livestats will be available for the match by accessing www.clemsontigers.com.