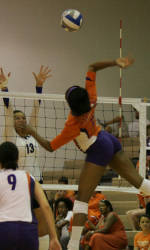 Miami took a 1-0 match lead, winning the first set, 25-22. Miami started out quickly, taking a 6-0 lead, giving them a cushion they would need to claim the set, as the Tigers continually fought back, getting as close as one at 21-22. Adeleye’s six kills in nine attacks led all players.

Clemson pushed back in the second set, winning 25-18. The Tigers used an 11-2 run to stretch a 9-8 deficit into a 19-11 advantage behind solid defense. The Tigers had four blocks during the run, leaving them with eight after two sets, and holding Miami to .000 hitting in the set, forcing 11 attack errors. Adeleye had another five kills in the set, and the Tigers got to 22 Miami attacks for digs.