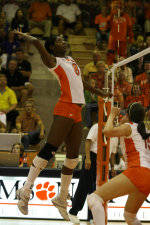 CLEMSON, SC – The Clemson volleyball team avenged a loss to Virginia Tech earlier this season and, in doing so, claimed sole possession of first place in the conference standings. With their 3-0 (25-20, 25-20, 25-11) sweep of the Hokies on Saturday night, the Tigers became the first ACC team to reach 10 league wins.

Clemson is now 10-3 against ACC foes with an 18-6 overall record. Virginia Tech won a 3-1 decision over the TIgers in late September on its home court, but Saturday’s loss was the Hokies second straight to drop them to 17-7 overall and 8-5 in the conference.

Tiger libero Didem Ege extended her steak of consecutive matches with at least 10 digs to 37 straight with 13 against the Hokies. The junior from Istanbul, Turkey is now just four digs shy of the Clemson career record.

The Tigers held the ACC’s leading hitter, in terms of hitting percentage, to just six kills on 14 attempts for a .286 figure. Felicia Willoughby entered the weekend’s action hitting at a .391 clip. She tied Kristen Cunningham for the team lead in kills for the Hokies.

Willoughby recorded the first point of the match with a solo block and then recorded a kill on the next play to give Virginia Tech a 2-0 to open the set. Hepburn responded with back-to-back kills for Clemson and the teams stayed within three points of each other for the majority of the set. With the Tigers up by just two at 20-18, they ran off three straight points and went on to win by a 25-20 margin.

Set two opened with five straight points for Clemson. A kill by Cansu Ozdemir put the Tigers on top by nine at 15-6. The Hokies chipped away at the lead and narrowed it to 20-16 on a kill by setter Michelle Lang. Murphy then put a ball down herself to return the service to Clemson and start a four-point run. Virginia Tech avoided four set points on Lang’s tough serve, but Abbott recorded a kill to give the Tigers the 2-0 lead in the match.

The Hokies stayed with Clemson to start the third set and were tied at seven apiece early in the frame. Head Coach Jolene Jordan Hoover called a timeout and the Tigers scored eight of the next nine points and allowed Virginia Tech just three more in the remainder of the set. Fennell clinched the Clemson victory with her fourth kills of the night as the Tigers won the set, 25-11, and the match, 3-0.

Clemson will be back in action next weekend to begin a four-match road stretch. The Tigers will play at Duke and Wake Forest on Friday and Saturday nights, respectively.