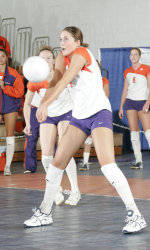 The Hokies edged Clemson in game one by a score of 30-28. Virginia Tech took an early 14-7 lead before the Tigers narrowed the gap to 16-14. After being down 19-15, Clemson managed to tied the score at 21-21. The score was knotted again at 27 apiece before Virginia Tech recorded the final three points for the win.

In game two, the Hokies never relinquished their lead, claiming the game, 30-22, to take a 2-0 advantage into the break. Hepburn posted six kills in the game without an error for a .600 hitting percentage, while Meghan Stanton tallied seven digs in the game.

Virginia Tech then won the third game by a score of 30-25 for its 10th win of the season.

Up next for Clemson is a trip to the State of North Carolina where the Tigers will face Duke and Wake Forest. Clemson will meet the Blue Devils on Thursday, Oct. 27 at 7:00 PM. The Tigers will then take to the court against the Demon Deacons at 7:00 PM on Friday, Oct. 28.