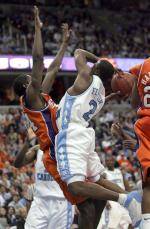 The Tiger Tracks Plays of the Year Countdown for men’s basketball begins with #5 in the ACC Tournament. After defeating Maryland for the third time in one season, Clemson faced top seed and heavy favorite North Carolina. The Tigers didn’t back down from the challenge and put up a valiant effort before losing 88-81. The Tiger attitude was especially on display on two blocked shots by James Mays and Sam Perry. Click to view the plays now on Tiger Tracks.