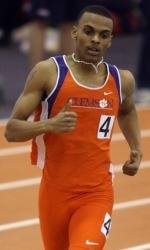 CLEMSON, SC – Clemson’s men’s and women’s track & field teams will travel to Blacksburg, VA to compete in the Virginia Tech Elite Meet on Friday and Saturday. The Tigers will send a full squad of men’s and women’s athletes to the meet, which will be held at Rector Field House – the same facility that will host the ACC Indoor Championships later this month.

The meet gets underway Friday, Feb. 4 with several field events beginning at 5:00 PM, as well as the women’s mile run. April Sinkler and Jasmine Brunson are slated for the long jump, while Josh Fowler will compete in the same event for the men’s team. Also at 5:00, Lauren Terstappen leads the Tigers in the pole vault and Brittney Waller is entered in the 20-pound weight throw.

Thor Serafenas, and the men’s pole vault. Michael Kopanski has been Clemson’s top performer in that event.

On the track Friday, much of Clemson’s time will be spent with the sprints and hurdles. The women’s 60 hurdle prelims are set for 5:45 PM. Clemson has seven entries in that event alone. Joe Craig is scheduled for the men, while the women will roll out Misha Morris. Kendrick owns the nation’s top time (7.22) in the event, which is also a Clemson record.

The invitational sections of the men’s and women’s 400m dash will be held Friday at 8:15 and 8:20, respectively. La’Mont Jackson, Jordan Rispress and Kyle Younkin) will handle the action for the men. The 800 meters will also be contested Friday, with the women’s race at 6:35 and men following at 6:45. Clemson will also debut its top distance runners in the 3K on Friday (6:55) in juniors Kim Ruck and Alyssa Kulik.

Most of Saturday’s action will be in the field for the Tigers. The women’s high jump is set for 11:00 AM, followed by the men’s and women’s triple jump and men’s shot put at 12 PM. Sinkler is one of the nation’s top performers in the triple jump so far this season. The women’s shot put, which will feature junior Danielle Curry, is scheduled for 2 PM.

On the track Saturday, Clemson will have a host of sprinters entered in the 200m dash invitational sections. In the women’s race at 2:05, Clemson will enter Kendrick, Morris, Jasmine Edgerson and Whitney Fountain. The men’s race (2:15) will feature Craig and sprint teammates Warren Fraser and Justin Murdock. The 4x400m relays will close the meet, starting at 3:15 PM on Saturday.