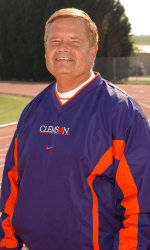 * – Live results will be available once the meet is underway.

CLEMSON, SC – The Clemson track & field teams will return home for a meet for the first time since February. The Tigers will host a number of schools from the Southeast in the second annual Bob Pollock Invitational on Saturday, May 5. The meet is named in honor of the former men’s coach who guided Clemson to 21 ACC Championships in cross country and track & field from 1988-2008. Pollock passed away in 2010.

The meet will be held at Rock Norman Track, and will feature top teams from the region such as Florida State and Virginia Tech. Clemson will also welcome 13 local elementary schools for sprints and relays featuring third through fifth graders. The first events held Saturday will be in the field, with the javelin throw and shot put starting at 10:00 AM. The track events will begin with mixed elementary school relays at 1:00 PM. The first college track event will be the women’s 4×100-meter relay at 1:45 PM.

Clemson carries a No. 2 national ranking in women’s track & field into this weekend’s action. The Tigers won their sixth consecutive ACC indoor or outdoor team championship two weeks ago in Charlottesville, VA. Several members from the women’s team will be in action Saturday, as well as some of the best athletes off the men’s squad.

The high hurdles competitions begin at 2:35 on the track. Clemson will enter five in the women’s 100 hurdles and four in the men’s 110 hurdles, led by national standout Spencer Adams. In the women’s race, school record-holder Brianna Rollins looks to see her first action since the preliminary round at the ACC Championships a few weeks ago.

Also on the track Saturday, Clemson will run a multitude of distance runners late in the day. The 1500-meter races are slated for 7:15 and 7:25, followed by the 800 at 7:30 and 7:35. Chris Slate, four-time All-ACC in the 800 meters, is one of five entries for Clemson in the men’s race at 7:35, the final track competition scheduled for Saturday.

Whitney Fountain, All-ACC in the heptathlon two weeks ago at the conference outdoor meet, has a busy day in store. She will compete in the javelin throw at 11 AM and long jump at 5:30 PM, coupled with the 100 hurdles in between the two field events.

The men’s shot put will feature three Clemson athletes Saturday at 11:00 PM. T.J. Christy, will also compete in the discus at 1:30 PM. He will throw the high school weight to try and qualify for the USA Junior Championships this summer.

The triple jump will be full of top-level performers. Shai Carpenter, who finished fourth at the ACC Championships in Charlottesville, is entered in the men’s competition at 12:00 PM. Carpenter is the school’s freshman record-holder with a leap of 51’8.25″. Jasmine Brunson and April Sinkler are slated for the women’s triple jump at 1:30. Sinkler was All-ACC in the event two weeks ago, while Brunson sat out with a heel bruise.

The women’s pole vault is scheduled for 5:00 PM. Three Tiger females – Caroline Bond, Meghan Flanagan and Christy Gasparino – are entered in the event. Gasparino earned her first all-conference accolade two weeks ago with a third-place effort in Charlottesville.