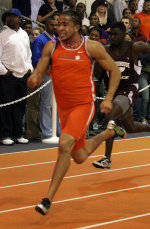 The Clemson men’s track & field team will split up and travel to two different meets this weekend. Four distance runners and a triple jumper will head to South Bend, IN for the Meyo Invitational, while the larger portion of the team will travel to Chapel Hill, NC for the Carolina Invitational.

On Friday, Itay Magidi will run the 3000m for Jason Bell, one of the top triple jumpers in the nation, will compete at 11:00 AM.

Most of the Tiger track & field team will be headed to Chapel Hill, NC for a one-day meet on the UNC campus. The events get underway for Clemson at 10:00 AM with the weight throw, featuring Matt Feiling. At the same time, three other field events will get started. Kenny Knox and Adam Linkenauger is slated for the high jump. A six-time ACC champion in the high jump, Linkenauger has yet to compete this season.

Jay Lumpkins will enter the 5000m competition at 10:20 AM for Clemson. Feathers will compete in the 60m high hurdles at 11:30 AM. Five Tigers could be entered in the 60m dash prelims at 12:30. C.J. Spiller are expected to make their Clemson debuts on Saturday. Also in the 60m dash will be Corey Brown, Fields, and Travis Padgett.

Anderson will also run either the 200m or 400m for the Tigers. Brown and Josh Elam, Tyrone Gayle and Brenton Shelton will also compete in the 800m for Clemson.

At 5:45 PM, Sean Reilly will compete in the 3000m to conclude the running events for Clemson. He may be joined by Lumpkins in that event.