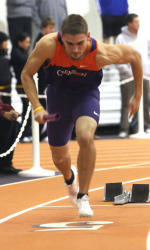 Clemson, SC – The Clemson track & field teams will travel to Blacksburg, VA this weekend to compete in the Hokie Invitational at Virginia Tech. The meet will take place Friday and Saturday at the school’s Rector Field House indoor facility.

The Tigers got off to a good start last weekend after posting multiple NCAA qualifying marks and even breaking a 12-year school record in the women’s high jump. This week, several student-athletes hope to also make a mark toward qualifying for the NCAA Indoor Championships.

The action gets started Friday at 5 PM with the women’s 60m dash and triple jump. April Sinkler will compete in the triple jump, and she will also participate in Saturday’s long jump. The sophomore out of Stafford, VA has qualified provisionally for NCAAs in both the high jump and long jump. She broke the school record in the high jump with a 5’10” clearance last weekend at the Clemson Invitational.

Also competing on Friday will be Liane Weber in the 60m hurdles and Josh Fowler in the men’s triple jump. He was an NCAA regional qualifier last outdoor season as a red-shirt freshman.

Saturday will feature a great deal of action in the field events. The women’s high jump will be the first event of the day and it will include Katie Farnan and Anastasia Wilson of the Clemson roster. Wilson jumped 5’8″ last weekend at home. Caroline Kennedy, a former All-ACC indoor performer, leads a group of three in the women’s pole vault at 11 AM.

The men’s pole vault is scheduled for 2:00. Daniel Inge, a highly thought of member of Clemson’s freshman class, will make his collegiate debut for the Tigers in the event.

George Fields, former ACC champion in the long jump, is scheduled for the event at 2:30 alongside Moss and Fowler. Fields ranks fifth in school history on the indoor long jump list.

On the track Saturday, the most notable performers will be Travis Swaggard in the quarter mile (1:35) and freshman Justin Murdock in the 200m (2:45). Murdock was a high school All-American at the 2008 National Scholastic Indoor Championships in the event.