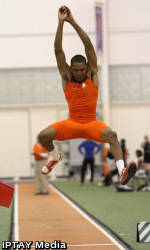 CLEMSON, SC – Clemson will travel 37 members of the men’s and women’s track & field program to Orlando, FL to compete in the UCF Invitational on Friday and Saturday. This will be the second meet of the outdoor season for the Tigers, but the first for many student-athletes making the trip. Clemson will use this weekend’s meet to prepare for a scored team competition in Arizona next week, the Jim Click Invitational.

Clemson graduate and fifth-year senior April Sinkler will make her return to the track for the Tigers. She completed her indoor eligibility in 2011 and sat out the winter, but will begin her final outdoor season of eligibility in Orlando on Friday and Saturday. She is slated for the long jump Friday at 3:30 PM, followed by the triple jump Saturday at 1:00. Sinkler is a seven-time ACC champion in the jumps.

The first action for the Tigers is Friday at 2 PM with the women’s javelin and women’s pole vault. Whitney Fountain, an indoor all-conference performer in the multi-events, is scheduled for the javelin, as well as the long jump, shot put, 100 hurdles and 200 dash.

Clemson will have four entries in the men’s long jump, which will follow the women’s event. C.J. Davidson are among the entries for Clemson. Also on Friday, the women’s hammer (3:30) and men’s hammer (5:30) throws will be held.

Saturday’s action gets underway early with T.J. Christy in the men’s discus at 11. The first track action of the weekend will begin at 12:30 PM with the women’s 4×100 relay.

Clemson will compete a handful in the two hurdle events. Jasmine Edgerson leads a group of three in the women’s 100 hurdles at 1:15 PM, followed by Marcus Maxey and others in the men’s 110 hurdles. Spencer Adams, an indoor All-American, will focus on the 400 hurdles Saturday afternoon at 3:35.

Clemson will send out a few runners in the 400-meter dash at 1:50, and then a group in the 200 later in the day at 3:45. Marlena Wesh, fifth at the NCAA Indoor Championships, headlines a group of females (including 60 hurdles runner-up Brianna Rollins) entered for Saturday’s competition. In the 200, men’s standouts Justin Murdock and Warren Fraser are slated to compete.