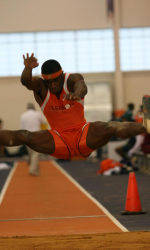 The Clemson men’s track & field team will return to action this weekend by taking part in the Virginia Tech Invitational. The Tigers will compete at the Rector Field House on Friday and Saturday in their second meet of the indoor season. It marks the first action for the team since the Clemson Indoor Opener, which took place December 1-2.

Friday’s action will be highlighted by a pair of returning All-Americans. Jason Bell and Ryan Koontz, and Lydell Perry are entered in the 55m hurdle trials at 5:55 PM.

Saturday’s action-packed day begins at 12:00 PM, with Fields, Koontz, and O’Rourke in the long jump. Soder will compete in the mile at 12:20 PM. At 1:35, Cowin Mills, Andrew Porter, and Travis Swaggard will run the 400m for the Tigers. Following that, Gayle will compete in the 800m. Mitch Greeley, a 2006 indoor All-American in the pole vault, will be joined by O’Rourke and freshman Chris Spear in that event Saturday afternoon. Feathers and Koontz will also compete in the high jump Saturday.

Finishing up the action from Saturday in the 200m will be Mills, Padgett, and Perry. A trio of outstanding distance runners are slated to compete in Saturday’s 3000m run at 3:30 PM, led by senior Itay Magidi. He will be joined by Matt Clark and Bryce Iverson in that event.