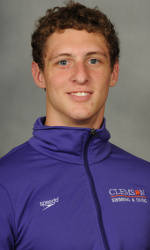 Tiger Swimmers Among Fastest in Nation

CLEMSON, SC – The Clemson men’s and women’s swimming and diving teams are off to a fast start this season, as evidenced by the presence of team members among the NCAA leaders in several events. Currently, the Tigers have four student-athletes ranked in seven events nationally, along with another that is ranked in the top ten in the Atlantic Coast Conference.

“I am extremely proud of our athletes and their ability to work through all obstacles,” Head Coach Christopher Ip said. “We still don’t have our home facility up and running for training or competition, but these Tigers are on a mission. Having four swimmers ranked top 50 in the country at this time in the season demonstrates our competitiveness.”

“Our seniors Chris Dart and Harry Foster have the motivation to excel as they close out their careers as Tigers. But to see juniors Eric Bruck and Meg Anderson pushing themselves to their limits even though there is no future for them here, demonstrate the passion they have for Clemson.”

For the men’s team, Eric Bruck is among the fastest sprinters in the country. He is currently ranked fourth in the nation in the 50 free and seventh in the nation in the 100 free. His times are second in the ACC in both events. Chris Dart is 14th nationally in the 200 back, 20th in the 200 IM, and 22nd nationally in the 100 back. He also ranks second in the conference in all three events. Harry Foster is also sixth in the ACC and 41st in the 100 fly, while Seth Broster ranks ninth in the league in the event.

The Tigers will return to the pool on Friday, November 18 in Atlanta, GA for the three-day Georgia Tech Invitational.