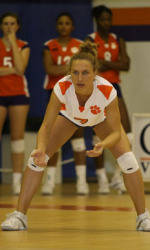 The Tigers will have a chance to clinch the conference title on Friday night, as they will play host to Florida State at 7:00 pm in their final home match of the regular season.

“I am really glad to get the win tonight,” said Clemson Head Coach Jolene Jordan Hoover. “Miami is a strong serving team and they kept us out of system. I felt like we couldn’t get into a rhythm, so I’m just happy with a win.”

Danielle Hepburn led the Tiger offense with 12 kills while Jeannette Abbott and Leslie Mansfield each notched 10 against the Hurricanes.

Defensively, Didem Ege totaled 17 kills and is now just one shy of a top-five mark for a single season with 520 on the year.

A six-point rally behind Ege’s serve erased a Tiger deficit in the first game. The run included a pair of kills by both Hepburn and Mansfield and put Clemson on top, 24-21. The Hurricanes tied the game at 26-26 before Hepburn’s eighth kill of the frame gave the Tigers the advantage. Miami then posted the next two points for the 28-27 edge, but Clemson capitalized on three straight Hurricane errors to eke out the win.

The Tigers started strong in the second game, opening on a 6-1 run. Their lead stretched to 10 points as an Abbott kill gave Clemson the 20-10 advantage. After back-to-back Miami scores, Abbott tallied another kill and recorded an ace to widen the gap back to 10. The Hurricanes inched back to within six at 26-20, but the Tigers closed out the game, 30-22, on a pair of blocks.

In game three, Clemson held an early 7-4 lead, but a four-point Miami run put the visitors on top by two. The Tiger then knotted the score at 14 before the Hurricanes jumped ahead again at 17-15. Four straight Clemson points, including kills by Mansfield and Steiner and an Abbott ace, gave the Tigers the ultimate advantage.

The teams mostly traded points for the remainder of the frame as Clemson held on for the 30-26 game win and its 25th victory of the year.