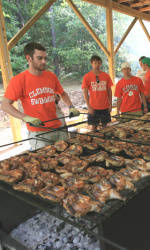 The Clemson men’s and women’s tennis and men’s and women’s swimming and diving teams served food at the Seneca High School Cafeteria on Sunday, August 24 from 3:00 to 7:30 p.m. The proceeds from the event benefited the Collins Children’s Home of Seneca. With a lot of laughs, sweat and controlled chaos, the tennis and swimming and diving teams served between 1500 and 1800 meals of some of the best finger-lickin’ chicken in the upstate.

The teams were honored to serve the children of the Collins Home and the community of Seneca that also supports this worthy cause and learned that giving back can be as much fun as receiving. The teams being able to work side by side in collaboration toward a common goal started the year off in a positive way.