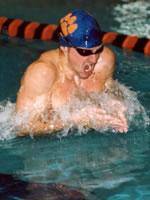 CLEMSON, SC – The Clemson men’s swimming and diving team will travel to Charlottesville, VA on Wednesday to begin competition at the 2004 ACC Men’s Swimming & Diving Championships. The conference meet will be held on Wednesday-Saturday at the UVa Aquatic and Fitness Center on Virginia’s campus. The preliminary rounds will be held at 11:00 a.m. with finals commencing at 7:00 p.m. each night.

The Tigers have posted a 13-2-1 overall record and a 4-1-1 mark in the ACC this season. The 13 dual victories are the most wins ever recorded by a Clemson men’s swimming and diving team, dating back to the program’s inception in 1953.

So far this season the Tigers have been led in swimming by seniors Ryan Cassella, Mark Henly, Rob Kummer and Drew Scheerhorn. Cassella has been a member of the Tigers’ winning 400 medley relay team nine times this season and has won the 200 breast three times and the 100 breast once in dual competition. Henly has been on the first-place 400 medley relay team seven times and has finished first in the 200 back eight times this season. He was named National Swimmer of the Week once and ACC Swimmer of the Week twice during the season.

Kummer has been a member of eight winning 400 medley relay teams for the Tigers and has placed first in the 200 fly four times. Scheerhorn has been a member of four first-place 400 medley relay teams and six first-place 400 free relay teams. He has won the 50 free five times and the 100 free four times in dual meet competition. Junior Eric Shulick has led Clemson in diving, winning the one-meter competition seven times in dual meets this season. He has qualified for the 2004 NCAA Zone Diving Regional Championships and will represent the Tigers at the meet for the second consecutive season.

At the 2003 ACC Championships, the Tigers finished in sixth place with 339 points. Virginia won the meet with 780 points, followed by Florida State and North Carolina in second and third with 567 and 555.5 points, respectively. Mark Henly was the ACC Champion in the 200 back in 2003, recording a time of 1:45.16 in the event.