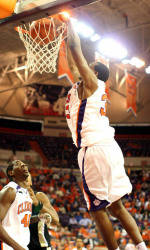  Cliff Hammonds needs just one steal to become the sixth player in ACC history with at least 1200 points, 400 rebounds, 400 assists and 200 steals. He is averaging 4.0 assists per game. He had a 4.0 GPA in his architecture and sociology dual major in the fall semester.

 Clemson senior Sam Perry had 10 points and five rebounds in just 13 minutes in the win over Wake Forest. It was his first double figure scoring game since December of 2006 when he scored 10 in a win over Georgia. It was the first time Perry has scored in double figures in an ACC game since his sophomore year (2005-06).

 K.C. Rivers had 19 points and 11 rebounds in the win over Wake Forest. It was his third double-double of the season and his four in his last 24 games. Rivers has made 13-20 three-point shots in ACC play and the .650 percentage is best in the league for ACC games.

 Clemson is ranked 25th by USA Today and 27th by AP. It is the 10th straight week Clemson has been in the top 25 of the USA Today poll, third longest streak in Clemson history.

 Clemson and Kansas are the only two teams in the nation ranked in the top 20 in steals and blocked shots. Clemson leads the ACC in steals per game.

 Clemson and Miami and the top two three-point shooting teams in the ACC on a percentage basis and rank in the top four in made three-pointers per game. Four of the top 10 ACC players in three-point goals made per game will be on the court at Miami on Sunday.

 Trevor Booker is 33-54 from the field and averages 15.8 points per game in ACC games this year.

 Three of Clemson’s six all-time wins over Miami have come in overtime, including last season.