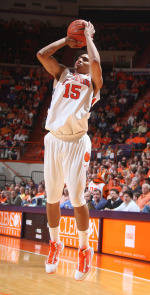 QUICK FACTS  Clemson and Winthrop will face each other for the ninth time in the series on Monday evening. The Tigers hold a 7-1 all-time advantage over the Eagles.

 The Tigers won the most recent meeting between the two schools in 2002, when the game was played at Anderson Civic Center due to renovations to Littlejohn Coliseum. Edward Scott played all 40 minutes in the 78-61 Tiger victory, producing 24 points and nine rebounds.

 The Tigers are currently riding a school record 11-game non-conference winning streak in road games. The streak dates to Nov. 12, 2006 when Clemson pulled out a 74-70 victory at Old Dominion. Clemson’s 11-game streak is currently the longest in the ACC.

 Clemson is coming off an 89-67 victory over UNC Greensboro. The Tigers shot 55 percent from the field and hit 8-17 from three-point range. Through three games, Clemson is hitting at a 45 percent clip from outside the arc.

 The Tigers are averaging 18 steals per game through the first three contests of the 2009-10 season. Clemson had 19 apiece versus Presbyterian and Liberty, then 16 in the win at UNC Greensboro.

 Clemson has an overall program record of 108-20-1 versus teams currently in the Big South Conference, including a 2-0 mark this season. The Tigers defeated Presbyterian and Liberty in the first two games. Clemson is 76-9-1 against Big South teams at home.

 David Potter ranks second on the team in scoring (12.0 ppg) and is coming off back-to-back double figure efforts for only the second time in his career. He posted a career-high 17 points in the Nov. 17 game against Liberty. The senior forward leads the team with 10 three-point goals on the season and a 66.7 percent accuracy.

 Trevor Booker is coming off his best offensive output of the season, with 17 points in 29 minutes of action at UNC Greensboro. He made 7-14 shots and added nine rebounds in the win.

 Booker is the ACC’s active leader in double-doubles (22), rebounds (821), and blocked shots (208). He needs just three blocks to pass Dale Davis for fourth on the school’s all-time list.

 Andre Young is off to a great start in his sophomore season. The Albany, GA native is averaging 10.0 points and 4.0 assists per game off the bench. He leads the team in steals (11) and is second in three-point shooting (54.5 percent).

 Milton Jennings had the top offensive showing of his young career at UNC Greensboro. Despite foul trouble in the first half, he finished with 14 points in 16 minutes and made 5-6 shots from the field.