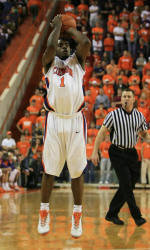 Quick Facts  Friday’s game will mark the 73rd meeting on the hardwood between Clemson and Presbyterian in men’s basketball. The Tigers hold a 53-18-1 advantage over the Blue Hose in a series that dates to the 1915-16 season.

 Last year’s contest between Clemson and Presbyterian was the first in the series since 1982- 83. The Tigers claimed a 74-57 victory at Littlejohn Coliseum last November.

 Head Coach Oliver Purnell earned his 100th win with the Tiger basketball program on Tuesday after the Tigers defeated Savannah State, 81-49. He has 356 victories in his career and has now won at least 100 games at both Dayton and Clemson.

 Clemson has been strong in November, having won its last 25 games in the month under Purnell’s watch. The Tiger program owns an all-time record of 93-15 in November as well.

 The Tigers rank first in the ACC as a team with 8.0 blocked shots per game. Clemson has actually recorded the top two single-game performances in the conference this season. The Tigers had 14 blocks against TCU on Nov. 15 and against Savannah State on Nov. 25.

 Four starters are averaging double figures in scoring for Purnell’s club, while point guard Demontez Stitt is not far away at 9.5 per game.

 K.C. Rivers is the 18th player in school history to score at least 1,300 career points. He needs just seven on Friday to move ahead of Sharone Wright for 17th place among the school’s all-time scoring leaders. Rivers has 1,302 career points.

 Terrence Oglesby surpassed the century mark for career three-point goals on Tuesday. He has 101 makes in just 40 games as a Tiger, and his 2.5 per game figure is third-best in school history.

 Trevor Booker leads the ACC in blocks per game (3.0) and is sixth in rebounds per game (9.8). He is the ACC’s active leader with 159 blocked shots in his career.

 Raymond Sykes and Jerai Grant have been productive in the frontcourt in Mays’ absence this season. Sykes is averaging 10.2 points per game and shooting 64 percent, while Grant has made 10 of 12 shots (.833) this season. Both also rank among the top 10 in the ACC in blocks per game.