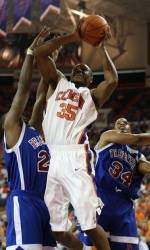 Quick Facts  Sunday’s game will be the fourth meeting between Clemson and Liberty. The Tigers hold a 3-0 advantage in the series, having won games in 1988, 1992, and most recently 2002.

 Liberty plays its conference opener Saturday at home against Gardner-Webb, then travels to Clemson on Sunday for a rare back-to-back effort in the regular season.

 With its 76-74 win at Illinois, Clemson now has an all-time record of 8-2 in the ACC/Big Ten Challenge. The Tigers have won five straight ACC/ Big Ten Challenge matchups under current Head Coach Oliver Purnell.

 Clemson is 4-2 on the road in the ACC/Big Ten Challenge, but has won each of its last three away games. The Tigers won at Penn State and Minnesota in back-to-back years (2005, 2006) before winning at Illinois on Tuesday.

 Head Coach Oliver Purnell earned his 100th win with the Tiger basketball program on Nov. 25 after the Tigers defeated Savannah State, 81-49. He has 358 victories in his career and has now won at least 100 games at both Dayton and Clemson.

 The Tigers are 2-0 on the road this season and 5-0 away from home. Clemson has won its last eight non-conference road games dating to the start of the 2006-07 season.

 Trevor Booker leads or is tied for the team lead in scoring, rebounding, blocked shots, and steals. He also ranks third on the squad in assists, behind point guards Demontez Stitt and Andre Young.

 K.C. Rivers ranks in a tie for 15th in the Clemson record books for points scored. He had 14 in the win over Illinois and now has 1,322 for his career, tied with Devin Gray (1991-95). Rivers needs just 20 points to move ahead of Larry Nance into 14th place. Nance was a longtime NBA standout.

 Demontez Stitt is coming off career-highs in both points (18) and steals (4) in the road win over Illinois. The sophomore made 8-11 shots and also had a season-best six assists in a fine effort.

 Raymond Sykes and Jerai Grant have combined to make 54-77 field goal attempts, which equates to a 70.1 percent figure. Sykes has more double figure scoring efforts as a senior (6) than he had total prior to this season (4). Grant leads the team in field goal percentage (.850).