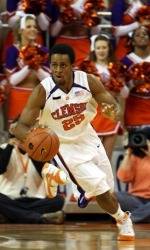  Cliff Hammonds needs just one steal to become the sixth player in ACC history with at least 1200 points, 400 rebounds, 400 assists and 200 steals.

 Clemson will be without the services of starting point guard Cliff Hammonds will move to the point guard.

 Trevor Booker suffered a sprained ankle in the first six minutes of the Miami game last Sunday. He is questionable for Boston College, but it could be in a limited capacity. In two career games over 45 minutes against Boston College, Booker has shot 10-15 from the field and has 20 points and 15 rebounds.

 Clemson senior Sam Perry had 10 points and five rebounds in just 13 minutes in the win over Wake Forest. It was his first double figure scoring game since December of 2006 when he scored 10 in a win over Georgia. He followed that up with another solid performance against Miami, scoring five points and pulling in three rebounds in just 13 minutes.

 Clemson has played four ACC home games so far this year and three of them have gone to overtime. Clemson is 2-1 in those three overtime home games.

 Clemson and Kansas are the only two teams in the nation ranked in the top 20 in steals and blocked shots. Clemson leads the ACC in steals per game.

 Saturday’s game with Boston College is Clemson’ only home game between Jan.22 and Feb. 13, a 23-day period. After Saturday, Clemson will play six of its next eight games on the road, including trips to Virginia and North Carolina next week.