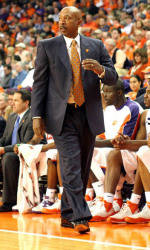  A victory on Thursday would give Clemson its first first round bye in the ACC Tournament.

 Cliff Hammonds played in his 81st Clemson victory when the Tigers defeated Maryland. He is now the second winningest player in Clemson history trailing only Elden Campbell who played in 84 wins from 1986-90.

 Clemson’s win at Maryland was a landmark accomplishment in that the Tigers trailed by 20 points (59-39) with 11:21 left, then came back to win the game. It was the largest second half deficit overcome to gain victory in Clemson history and the largest comeback in any ACC game in school history.

 Clemson’s senior class won its 10th ACC road game when it won at Maryland. That is a record for ACC road wins for a Clemson class.

 Clemson has a 6-2 record since Sam Perry was incerted into the starting lineup on February 2.

 Oliver Purnell now has an 11-9 record in March, the only Clemson coach with a winning March record since 1940.

 Since down-sizing and then eliminating the protective brace on his broken left hand on Feb. 27, James Mays has shot 13-20 from the field, scored 30 points, had 14 rebounds and had five steals. For the year he has shot 52.4 percent without the brace and 43.4 with it on.

 The victory at Maryland gave Clemson nine ACC wins and 21 overall wins. Every ACC team in history with at least nine league wins and 20 overall wins has been selected for the NCAA Tournament.

 Terrence Oglesby made the winning three-point goal at Maryland with 2.3 seconds remaining. He was named ACC Rookie of the Week. Oglesby leads the Clemson team in scoring in the last five minutes of games decided by 10 points or less or in overtime with 41 points. He has 70 three-point goals, five short of the Clemson freshman record of 75 set by Tony Stockman in 2000-01.