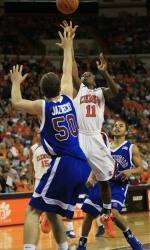 Quick Facts  Saturday’s game will mark the third meeting between Clemson and East Carolina, all within the past five seasons. The Tigers won both of the previous matchups, including an 82-67 game on the road last year against the Pirates.  The Tigers moved up to #16 in the ESPN/USA Today coaches’ poll on Dec. 29 and #20 in the Associated Press rankings. It marks the third straight week Clemson has been ranked by both of the major national polls.  Clemson has won its last nine road games against non-conference opponents, which is a school record streak. The Tigers have beaten Charlotte, Illinois, and South Carolina outside of ACC play on the road this season.  The Tigers are 13-0 for the second time in the last three seasons. In 2006-07, Clemson was the nation’s last remaining unbeaten team at 17-0. This year, the Tigers are one of only six undefeated teams remaining in Division I.  Clemson has overcome five deficits of eight or more points to earn victory this season. In fact, the Tigers have come from at least 10 down on three occasions, including the last two games. Against Miami, the Tigers rallied from 12 down and versus South Carolina, Clemson overcame an early 11- point disadvantage.  Clemson has scored 90+ points in its last two games, both on the road. It marks the first time Clemson has scored 90 or more in consecutive road wins since the 1986-87 season.  K.C. Rivers needs just five points to pass Will Solomon for 11th on Clemson’s all-time scoring list. He currently has 1,427 points for his career.  Rivers has played in 81 victories during his career at Clemson. Only Elden Campbell (1986-90) and Cliff Hammonds (2004-08) played in more (84).  Trevor Booker needs just four blocked shots to move into fifth place in Clemson’s record books. He has 174 blocks in his career. Sharrod Ford, who ranks fifth, had 177 from 2001-05.  Booker and Rivers are tied for 19th on Clemson’s all-time rebounds list with 606 apiece. Booker is second in the ACC with 9.6 rebounds per game.  Terrence Oglesby ranks third in school history with 2.62 three-point goals per game. He has 123 made three-pointers in his career and needs just seven to move ahead of Bruce Martin for 10th place in Clemson’s record books.  Andre Young is coming off the best game of his brief career. The Albany, GA native posted careerhighs in minutes (26), points (13), assists (8), and steals (4) and fueled Clemson’s comeback win over in-state rival South Carolina.