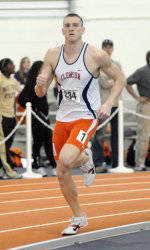 Clemson, SC – The men’s track & field team will host three schools in a scored meet this Saturday, the Clemson Invitational. Appalachian State, Georgia, and Western Carolina will compete with the Tigers in the team scoring portion, while Virginia Tech will also bring select student-athletes to town. Events get underway Saturday morning at 10:00 AM with the hammer throw.

The Tiger sprinters have taken center stage so far this outdoor season and will receive a boost this weekend from football players C.J. Spiller. The two will participate in Saturday morning’s football scrimmage, and then make it over to the outdoor track for the 4x100m relay, 100m and 200m dash.

Corey Brown has qualified regionally in the 100m, 200m, and 4x100m relay. The rest of the relay team, Travis Padgett, Spiller and Ford, will compete at 12:35 PM. Padgett, who owns the team’s top time this season in the 100m, will lead a strong contingency of Clemson athletes in that event at 2:05 PM. Ford and Spiller will be making their outdoor debuts at Clemson. Ford was an indoor All-American in the 60m dash. The 200m is set for 3:15 PM.

Matt Clark qualified for regionals last weekend with a strong performance at the Stanford Invitational in the 5000m run. He will be one of four Tigers competing in the 1500m this weekend, which will take place at 12:55.

Adam Linkenauger and Mitch Greeley both own regional marks in the vertical jumps, but both look to improve on their season bests this weekend. Linkenauger leads a group of four in the high jump at 1:30. Greeley and three other Tiger vaulters will compete at 2:00.

Jason Bell will compete in the horizontal jumps Saturday, hoping to post regional-qualifying marks in their respective events. Fields, the ACC indoor champion in the long jump, holds a season-best mark of 23’10.25″ in that event this outdoor season. Bell has yet to compete outdoors, but was an indoor All-American in the triple jump this season. The long jump is set for 1:00, while the triple jump will be held at 3:00.

Multi-event athlete Ryan Koontz will again have a busy afternoon. The senior will take part in the 400m dash, high jump, long jump, shot put, and discus throw. Zach Berg will join him in the discus throw as well as the hammer.