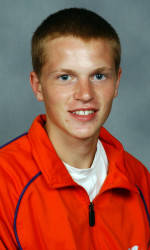 The Clemson men’s cross country team will travel to Terre Haute, IN for the Pre-NCAA Championships, which will be held Saturday afternoon at the Wabash Valley Sports Center. The Tigers will compete in the 8K blue race, which will feature a stellar group of teams from Division I.

The blue race is set to get underway approximately 12:10 PM on Saturday. The Tigers will face stiff competition, as 11 schools currently ranked in the USTFCCCA top 30 coaches’ poll will be featured in the blue race. Three schools ranked in the nation’s top 10 will be in the race (Colorado, Arizona, Oklahoma State). Also running in the race will be ACC schools Duke, Florida State, and N.C. State.

Last season, Clemson finished 22nd out of 34 teams in the white race. Itay Magidi, who has yet to compete this season, will make the trip this weekend for Clemson. He qualified for the NCAA Cross Country Championships two years ago and is a two-time All-American on the track.

So far this season, sophomores Sam Bryfczynski and Bryce Iverson have held down the top two spots in the lineup for Bob Pollock’s cross country squad. Bryfczynski won the individual title at the Clemson Invitational to start the season, while Iverson was 13th to lead the Tiger team at the Greater Louisville Classic on September 30. Bryfczynski was 23rd in that event as well.

Brian Soder has scored in both meets so far this season for the Tigers, which included a fifth-place finish at the Clemson Invitational. He was 42nd overall at Louisville, where he ran the 8K course in 25:25.33. His brother, Eric, was 65th in that event as Clemson’s #4 scorer. Last time out, Will Noble ran 67th and was the Tigers’ fifth and final scorer. Noble also has a third-place finish to his credit, which came at the season opener in Clemson.

Also making the trip this weekend for the Tiger team will be junior Sean Reilly, who was sixth at the Clemson Invitational to begin the season. He competed in this event a year ago as well and finished as the Tigers’ #3 scorer.