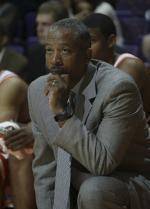 Each week fans attending “Tiger Calls” will have the opportunity to win an Oliver Purnell autographed basketball courtesy of Roper Ford in Seneca and Chick-fil-A of Seneca.