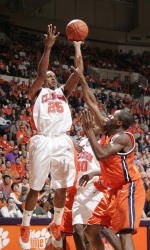 Clemson, SC – Oliver Purnell’s Clemson basketball team had a record setting first semester on the court and set a record in the classroom at the same time. The Tigers posted a team GPA of 2.55 for the fall semester of 2006, the highest figure on record for a fall semester.

Five Tigers were named to the academic honor roll for the fall semester, including starters Cliff Hammonds and Sam Perry. Hammonds is studying architecture and is attempting to become the first scholarship basketball player on record to earn a degree in that academic discipline. He was named to the All-ACC Academic team in 2005 and has a career GPA over 3.0.

Other Tigers who were named to the academic honor roll for the fall were Matt Morris, Chris Poole and A.J. Tyler.

“We are pleased that we are continuing to make progress and showing consistency in this area of our program,” said Clemson Head Coach Oliver Purnell’s.

The team had a 2.66 GPA for the spring semester of 2006, the highest for any semester by the basketball program since the spring of 1983. It marked the third consecutive semester that the team GPA was at least 2.45, a first for the program on record.