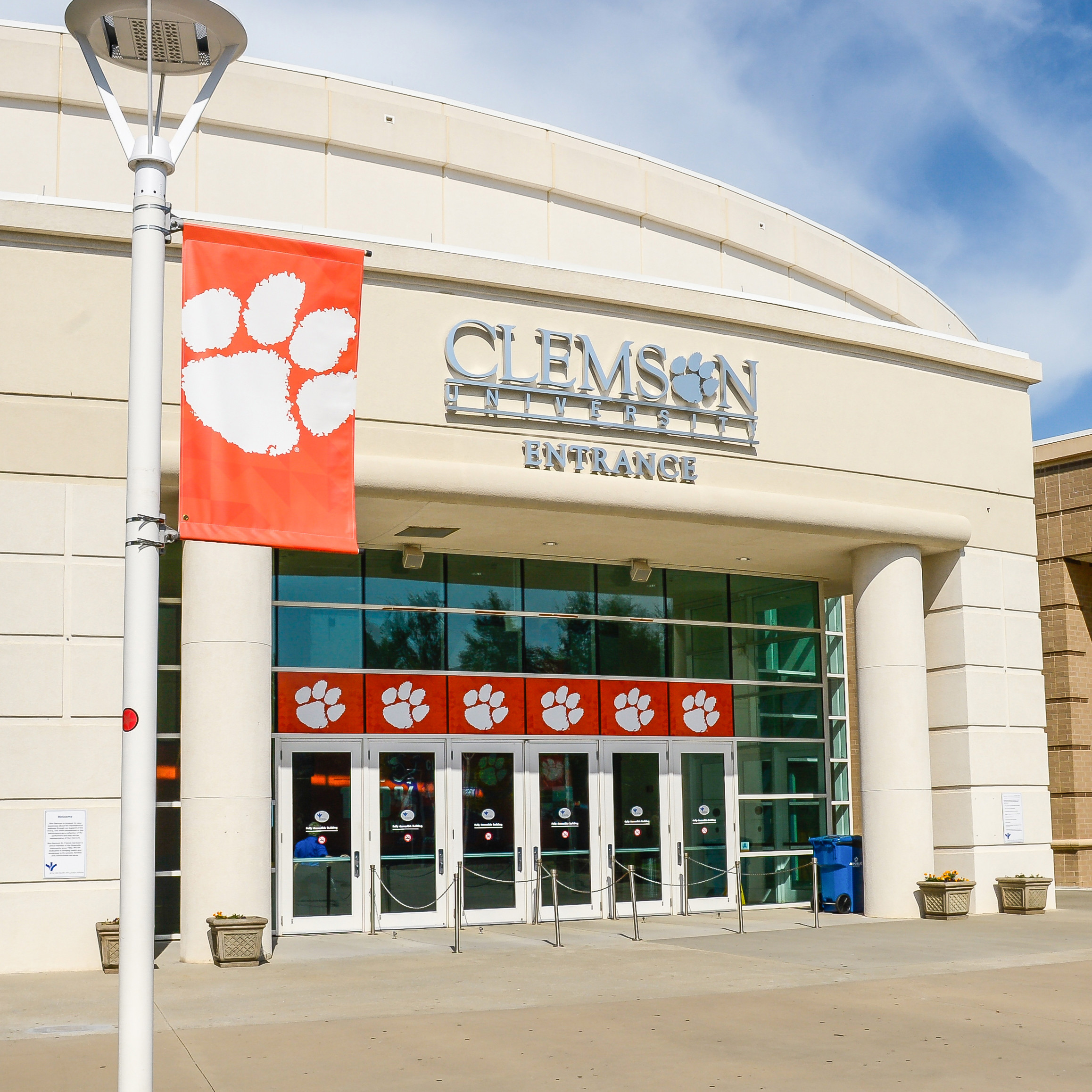 When Clemson athletics knew its men’s basketball program would have to be displaced for a year in order to renovate Littlejohn Coliseum, there was only one destination that made sense for a temporary home.

More than 14,000 Clemson alumni currently live in the greater Greenville, S.C., area. The region is home to the largest percentage of IPTAY members. And for those reasons, the move to Greenville and Bon Secours Wellness Arena for the 2015-16 season was the most logical and practical choice for the Tigers.

“We are truly honored and privileged to bring Clemson orange to Greenville,” said Beth Paul, general manager at Bon Secours Wellness Arena. “Thanks to everyone at Clemson for making this possible.”

The partnership was formally announced at a ribbon-cutting ceremony inside the special Clemson entrance in April. It was an event attended not only by representatives of the athletic department and men’s basketball program, but also the university.

President Jim Clements and several members of his staff were on hand to assist in the ribbon cutting, as Bon Secours Wellness Arena was announced as the home to Clemson graduations for commencement ceremonies in 2015 and 2016.

Clements acknowledged the impact the Greenville community has had on Clemson, and in turn expects a significant economic boost due to the new partnership with the arena.

“Greenville is like a second home to Clemson,” said Clements. “And now, Bon Secours Wellness Arena is a second home for our men’s basketball team.”

Head coach Brad Brownell’s team first took the floor publicly on November 5 in an exhibition against Lenoir-Rhyne. The Tigers have 17 regular-season games scheduled for Bon Secours Wellness Arena, with a number of marquee opponents, defending NCAA champion Duke among them, coming to Greenville.

Brownell expects a new energy from the Greenville community, and hopes it will carry over to his players on the hardwood.

“People look forward to seeing us, and I think in some ways it will be easier for our fans in that area to watch the Tigers,” stated Brownell. “We’ve done a good job as a department of trying to promote our players and getting them to Greenville a few times. We’ve made people aware that Clemson basketball is coming, and we’re going to need their support.”

Bon Secours Wellness Arena put on two “open house” events over the summer, where fans and IPTAY members alike were able to come in and view the arena, its amenities and seating layout. Several current Tigers took part in the event.

In September, the team pulled a surprise in downtown Greenville at one of the Saturday market events on Main Street. Jaron Blossomgame, Donte Grantham, Jordan Roper and Josh Smith were driven to the corner of Main Street and McBee Street, and with the accompaniment of D.J. Sha and a portable goal, popped up seemingly out of nowhere, much to the surprise and enjoyment of the crowded area.

The players spent time visiting with fans, meeting new faces, passing out schedule cards and playing games with children. From “around the world” to “knockout,” the players enjoyed being in uniform interacting with a different demographic.

“It was good to get out in the community and get people to see us in the community outside of basketball,” said Blossomgame. “It was a pretty successful day, because people were able to interact with us.”

The excitement and anxiety of playing in a new arena is tempered a bit by some of the challenges the program faces on a daily basis. Men’s basketball shares court space in Jervey Gym with volleyball and women’s basketball, making the practice schedule challenging. Plus, the team has had to adjust to a smaller locker room and film room on the ground floor of Jervey Athletic Center.

In talking to the players that make up the 2015-16 roster, they firmly believe such close quarters have helped the team’s chemistry grow stronger as the season nears.

With the excitement of a newly improved Littlejohn Coliseum just around the corner, the Tigers are not sleeping on the potential long-term benefit of playing in Greenville.

“It’ll be awesome. I think everyone is excited for a new experience and playing in front of a new crowd.” – Senior guard Jordan Roper

“I’m really looking forward to going to the Greenville community, and it will be really good for us to have them involved with our basketball program.” – Senior center Landry Nnoko

“I’m closer to my family, which is great. But extending and reaching out to that fanbase in Greenville is important.” – Senior forward Josh Smith

“It’s important for us to get to a new arena and to get to know some more fans. I think that will be very good for us.” – Junior center Sidy Djitte

“It’s a different fanbase. Hopefully, they help us win a lot of games and we can bring them back to Littlejohn Coliseum next year.” – Sophomore guard Gabe DeVoe

“It’s a bigger stage for us. The arena is bigger, so we can draw more of a crowd. The whole process will be really good.” – Junior guard Avry Holmes

“Even though I can’t play this year, I’m excited for the team, because it’s a new environment and it’s in one of the biggest towns in South Carolina.” – Sophomore guard Marcquise Reed