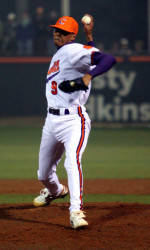 The Series Clemson and Duke have met 175 times on the diamond, with the Tigers holding a 114-60-1 lead in the series dating back to the 1904 season. Clemson has won 10 games in a row in the series, including three-game sweeps each of the last three years.

The Tigers hold a 45-25 lead in games played at Duke and 90-30-1 advantage in ACC regular-season games. Jack Leggett is 34-10 against the Blue Devils as Clemson’s head coach, including a 15-6 record at Jack Coombs Field.

The Starting Pitchers In game-one, Duke will start junior righthander Andrew Wolcott (3-2, 2.91 ERA) on the mound. The Grayslake, IL native has made eight starts for a total of 46.1 innings pitched. He has allowed 46 hits (.249 opponents’ batting average) and 15 walks with 26 strikeouts. He has also given up just one homer.

The Tigers will counter with junior righthander D.J. Mitchell (3-3, 3.15 ERA) on Friday. The Rural Hall, NC native has made eight starts and four relief appearances for a total of 54.1 innings pitched. He has yielded 51 hits (.244 opponents’ batting average) and 26 walks with 54 strikeouts.

The Blue Devils have yet to determine their starting pitchers for the last two games of the series.

Clemson will start freshman righty Graham Stoneburner (4-1, 3.06 ERA) on Saturday. The Richmond, VA native has made eight starts and two relief appearances for a total of 47.0 innings pitched. He has allowed 43 hits (.242 opponents’ batting average) and 10 walks with 34 strikeouts.

The Tigers have yet to determine their starting pitcher for game-three.

The Blue Devils Duke, led by third-year Head Coach Sean McNally, enters the series against Clemson with a 26-12 overall record and 5-12 ACC mark after winning three midweek games. Duke, who is 22-5 at home, beat North Carolina Central in both games of a doubleheader at home on Tuesday by scores of 8-2 and 22-0. The Blue Devils then won at Campbell by a score of 16-2 on Wednesday. Last weekend, Duke lost two of three games at N.C. State as well.

The pitching staff has a 3.51 ERA and .255 opponents’ batting average along with 248 strikeouts against 108 walks in 333.0 innings pitched. Four different Blue Devils have accounted for the team’s nine saves, including a team-high four saves by Hassan. Michael Ness has a 2.27 ERA, two saves, and a .229 opponents’ batting average in 14 relief appearances. Duke is fielding at a .979 clip as well.

The Tigers Clemson enters the series at Duke with an 18-19 overall record and 6-12 ACC mark after losing midweek games at home against Western Carolina (6-2) and #10 South Carolina (6-0). Clemson, who is in the midst of an 11-game losing streak, was also swept by #4 North Carolina last weekend. The Tigers sport a 4-9 road record as well.

The pitching staff has a 4.69 ERA and .276 opponents’ batting average. Righthander Matt Vaughn has struck out 23 against six walks in 22.0 innings pitched and has eight saves in 18 relief appearances. The Tigers are fielding at a .963 clip as well.

Catamounts Outlast Tigers 6-2 Western Carolina scored two runs in the seventh inning and three runs in the ninth to down Clemson 6-2 at Doug Kingsmore Stadium on April 15. Matt Sanders hit his first career home run in the third inning. But with the Tigers ahead 2-1, Barrett Shaft hit a two-out, two-run homer in the top of the seventh inning. Trailing 3-2 in the bottom of the seventh inning, Clemson had runners at second and third with one out, but the Tigers failed to tie the score. Then a costly Tiger error led to three Catamount runs in the ninth inning. Shaft went 3-for-4 with four RBIs, while Reid Rollison went 3-for-3 with a home run for the Catamounts. Western Carolina outhit Clemson 12-5 as well.

Gamecocks Blank Tigers 6-0 Nick Godwin pitched 7.2 scoreless innings of three-hit ball to lead #10 South Carolina to a 6-0 victory over Clemson at Doug Kingsmore Stadium on April 16. With the win, the Gameocks won the season series 4-0. Godwin allowed just three singles, no runs, and three walks with seven strikeouts to earn his second win over the Tigers in as many weeks. He and Craig Thomas combined for 10 strikeouts and allowed just three singles in the game. South Carolina scored five runs in the fourth inning behind five extra-base hits, including back-to-back home runs by Justin Hopper and Scott Wingo. Reese Havens and Whit Merrifield added three hits apiece for the Gamecocks, who had 13 hits in the contest.