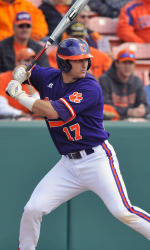 Clemson vs. USC Upstate Clemson (23-14), ranked as high as #20 in the nation, will host USC Upstate (13-28 entering Tuesday’s game at South Carolina) on Wednesday night at Doug Kingsmore Stadium. First pitch is scheduled for 6:30 PM. Wednesday’s game is designated as Operation Military Kids Night. Military families can purchase tickets for Wednesday’s game for just $3 to watch the Tigers battle the Spartans. Tickets can be purchased at the gate or by calling 1-800-CLEMSON.

Wednesday’s game will be available live via webcast on TigerCast. The game will also be broadcast live on the radio by WCCP (104.9 FM) out of Clemson and can be heard live on the internet at ClemsonTigers.com as well.

The Series Clemson and USC Upstate have met one time on the diamond. On March 18, 2009, the Tigers defeated the Spartans by a score of 14-0 at Doug Kingsmore Stadium. Righthanders Justin Sarratt, Scott Weismann, Kyle Deese, Tomas Cruz, and Matt Vaughn combined to pitch Clemson’s first no-hitter in 25 years in the game. Mike Freeman went 4-for-5 with a homer, a career-high seven RBIs, and three runs as well.

The Starting Pitchers The Spartans will start sophomore righty Austin Moyer (1-4, 7.41 ERA) on the mound. The Greensboro, NC native has made seven starts and two relief appearances for a total of 34.0 innings pitched. He has allowed 46 hits (.338 opponents’ batting average) and 20 walks with 28 strikeouts.

The Tigers will counter with sophomore righthander David Haselden (3-3, 4.38 ERA) on Wednesday. The Spartanburg, SC native has made 13 relief appearances for a total of 24.2 innings pitched. He has yielded 25 hits (.258 opponents’ batting average) and nine walks with 21 strikeouts.

The Spartans USC Upstate, led by 13th-year Head Coach Matt Fincher, enters Tuesday’s game at #5 South Carolina with a 13-28 overall record and 3-15 Atlantic Sun Conference mark after defeating Campbell twice in three games at home over the weekend. The Spartans, who are 3-14 on the road, have won four of their last five games after losing 25 of their previous 27 games. Fincher’s top assistant coach is Russell Triplett, who was a four-time letterman (2001-04) at Clemson who was a career .312 hitter in 222 games.

Jimmy Tanner leads the team with a .384 batting average along with two homers, 26 RBIs, and 27 walks against only 12 strikeouts. Tyler Cook is hitting .336 with two homers and 24 RBIs, while Joe Barnes is batting .312.

The pitching staff has a 7.35 ERA and .332 opponents’ batting average along with 268 strikeouts against 170 walks in 357.1 innings pitched. Senior righthander Tyler Oliver has a 2-1 record, 4.58 ERA, and a team-high four saves in 35.1 innings pitched over 17 relief appearances. The Spartans are fielding at a .950 clip as well.

The Tigers Clemson, ranked as high as #20 in the nation, enters Wednesday’s game against USC Upstate with a 23-14 overall record and 10-8 ACC mark after falling three times in three games at #5 Georgia Tech over the weekend. The Tigers, who have lost five games in a row, are 18-5 at home this season.

Kyle Parker is hitting a team-high .365 with 14 homers, 36 RBIs, 45 runs, and a .491 on-base percentage. On Sunday at Georgia Tech, Parker became the 10th player in Clemson history to reach 40 career home runs. John Hinson is batting .351 with five homers and 36 RBIs, Brad Miller is batting .312 with a .452 on-base percentage, and Jeff Schaus has eight homers and 48 RBIs. John Nester is riding a 10-game hitting streak as well.

The pitching staff has a 4.73 ERA and .271 opponents’ batting average. The staff has allowed 126 walks against 261 strikeouts. Righthanders Alex Frederick, and Jonathan Meyer all have two saves apiece. The Tigers are fielding at a .959 clip as well.

Polls The Tigers fell four spots to #20 in the Sports Weekly coaches poll this week after going 0-4 in four games last week. The Tigers also dropped out of the top 25 in both the Collegiate Baseball and Baseball America polls. With Clemson’s top-25 ranking this week, it marks the 28th week in a row the Tigers have been ranked in the top 25 of at least one of the three major polls dating to the start of the 2009 season.

ACC Standings The Tigers are in second place in the ACC Atlantic Division standings with a 10-8 league record. In the division, Florida State is in first place with a 12-6 record. N.C. State and Boston College are tied for third at 9-9, Maryland (4-14) is fifth, and Wake Forest (2-16) is sixth in the division. Georgia Tech is atop the Coastal division with a 15-3 record, while Miami (FL) is second with a 14-4 mark.

In game-two on April 17, Jacob Esch and Jeff Rowland both hit run-scoring singles with two outs in the seventh inning to propel Georgia Tech to a 4-3 win over Clemson. Georgia Tech hit two solo homers sandwiched around a run-scoring double and solo home run by Parker, then the Tigers took a 3-2 lead in the top of the seventh inning on an error. But the two clutch hits by Esch and Rowland proved to be the difference. The Tigers were just 1-for-10 with runners in scoring position and left eight runners on base, including seven in scoring position.

In game-three on April 18, Georgia Tech scored in all eight of its innings at the plate in its 11-3 win over Clemson. Rowland, Tony Plagman, and Esch totaled four hits apiece, as the Yellow Jackets had 17 hits in all. Parker hit a solo homer in the top of the second inning, but Georgia Tech scored four runs in the bottom of the second and never looked back. Jed Bradley tossed 7.0 strong innings with eight strikeouts against no walks to earn the victory.