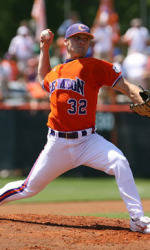 Clemson vs. UNC Wilmington Clemson (32-16), ranked as high as #19 in the nation, will host UNC Wilmington (25-17) in a three-game series at Doug Kingsmore Stadium this weekend. Game times are 6:30 PM (Friday), 6:30 PM (Saturday), and 1:00 PM (Sunday). The Friday and Saturday games will be available live via webcast at ClemsonTigers.com for all three games.

The Series Clemson and UNC Wilmington have met 39 times, with the Tigers holding a 32-7 lead in the series dating back to 1976. The two teams last played in 1998, when Clemson swept the Seahawks in three games at Doug Kingsmore Stadium.

Clemson has won seven games in row in the series dating back to a 5-1 Seahawk win in 1992 and 16 of the last 17 meetings. The Tigers also own an 11-game winning streak at Doug Kingsmore Stadium dating back to an 8-5 UNC Wilmington win in 1984.

The Tigers lead 19-2 in games at Clemson, all of which have taken place at Doug Kingsmore Stadium. Jack Leggett is 5-0 against the Seahawks as Clemson’s head coach.

The Starting Pitchers In game-one, UNC Wilmington will start junior righthander Seth Frankoff (2-4, 5.02 ERA) on the mound. The Apex, NC native has made nine starts and one relief appearance for a total of 52.0 innings pitched. He has allowed 52 hits (.263 opponents’ batting average) and 22 walks with 45 strikeouts.

The Tigers will counter with senior righthander Trey Delk (2-1, 2.40 ERA) on Friday. The Elgin, SC native has made seven starts for a total of 30.0 innings pitched. He has allowed 31 hits (.265 opponents’ batting average) and 13 walks with 27 strikeouts.

In game-two, the Seahawks will send out sophomore lefthander Cameron Roth (0-1, 6.00 ERA) on the mound. The Poquoson, VA native has made five relief appearances and three starts for a total of 13.0 innings pitched. He has yielded 19 hits (.358 opponents’ batting average) and eight walks with seven strikeouts.

Clemson will counter with sophomore lefty Casey Harman (5-3, 3.83 ERA) on Saturday. The South Burlington, VT native has made nine relief appearances and eight starts for a total of 56.1 innings pitched. He has given up 64 hits (.288 opponents’ batting average) and 10 walks with 50 strikeouts.

UNC Wilmington’s starter for game-three has yet to be determined.

The Seahawks UNC Wilmington, led by 18th-year Head Coach Mark Scalf, enters the series at #19 Clemson with a 25-17 overall record and 8-7 Colonial Athletic Association mark after defeating N.C. State 5-1 on Wednesday night at home. Prior to that game, the Seahawks’ last games came in a doubleheader sweep of North Carolina-Central on April 28. UNC Wilmington sports a 2-11 road record as well.

The pitching staff has a 5.03 ERA and .266 opponents’ batting average along with 284 strikeouts against 184 walks in 365.1 innings pitched. Freshman righthander Tyler McSwain has a team-high four saves along with a 3.06 ERA and 38 strikeouts in 35.1 innings pitched over 21 appearances this season. The Seahawks are fielding at a .966 clip as well.

The Tigers Clemson, ranked as high as #19 in the nation, enters the series against UNC Wilmington with a 32-16 overall record and 16-11 ACC mark after winning two of three games against Maryland at home over the weekend. The Tigers are 24-7 at home this season.

The pitching staff has a 3.59 ERA and .250 opponents’ batting average. The staff has allowed 148 walks against 405 strikeouts, good for a 2.7-to-1 strikeout-to-walk ratio. Tomas Cruz and Matt Vaughn are tied for the team-lead with three saves apiece. The Tigers are fielding at a .968 clip as well.