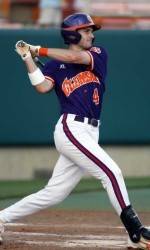 The Series Clemson and Florida State have met 114 times on the diamond, with the Seminoles holding a 63-50-1 lead in the series dating back to 1958.

The Tigers hold a 25-18 lead over the Seminoles in games played at Clemson and a 23-14 lead at Doug Kingsmore Stadium. The Seminoles hold a 28-26 advantage in ACC regular-season games.

Doug Kingsmore Stadium. All 62 of Leggett’s games coached against Florida State have been against a top-25 ranked Seminole team.

The Starting Pitchers In game-one, Florida State will start sophomore lefthander Sean Gilmartin (6-6, 4.52 ERA) on the mound. The Moorpark, CA native has made 13 starts for a total of 77.2 innings pitched. He has allowed 84 hits (.281 opponents’ batting average) and 21 walks with 77 strikeouts.

The Tigers will counter with junior lefthander Casey Harman (6-2, 3.83 ERA) on Thursday. The South Burlington, VT native has made 13 starts for a total of 80.0 innings pitched. He has allowed 74 hits (.244 opponents’ batting average) and 22 walks with 62 strikeouts.

In game-two, the Seminoles will send out sophomore lefty Brian Busch (4-0, 3.65 ERA) on the mound. The Boca Raton, FL native has made 11 relief appearances and five starts for a total of 56.2 innings pitched. He has yielded 45 hits (.224 opponents’ batting average) and 22 walks with 59 strikeouts.

Clemson will counter with sophomore righty Scott Weismann (5-2, 5.17 ERA) on Friday. The Boxborough, MA native has made 13 starts for a total of 69.2 innings pitched. He has given up 77 hits (.281 opponents’ batting average) and 23 walks with 58 strikeouts.

Both team’s starting pitchers for game-three on Saturday have yet to be determined.

The Seminoles Florida State, led by 31st-year Head Coach Mike Martin and ranked as high as #7 in the nation, enters the series at #22 Clemson with a 39-13 overall record and 18-9 ACC mark after winning two of three games at home over N.C. State last weekend. The Seminoles, who have lost back-to-back games just twice all year and have not lost three games in a row, are 11-5 on opponents’ home fields and 8-3 in one-run games.

The Tigers Clemson, ranked as high as #22 in the nation, enters the series against #7 Florida State with a 34-19 overall record and 15-12 ACC mark after downing Presbyterian at home 8-2 on Tuesday night. The Tigers, who also lost two of three games at Wake Forest last weekend, are 24-8 at home in 2010.

The pitching staff has a 4.64 ERA and .278 opponents’ batting average. The staff has allowed 174 walks against 358 strikeouts. Righthanders Alex Frederick, Tomas Cruz, and Jonathan Meyer all have two saves apiece. The Tigers are fielding at a .961 clip as well.

Firth’s Freshman Facts Freshman righthander Scott Firth (Buffalo Grove, IL) cemented his place as Clemson’s top midweek starter late in the regular season. He had strong starting outings in earning wins over Furman (May 11) and Presbyterian (May 18), his first two victories as a Tiger.

Against the Paladins, he tossed 6.0 innings, allowing just six hits, one run, and one walk with four strikeouts. He allowed the leadoff batter of the game to score and a two-out double in the first inning, but no Paladin advanced past first base during the rest of his outing. Then against the Blue Hose, he tossed 5.1 innings, allowing just two runs and no walks with six strikeouts.

Tigers Outlast Presbyterian 8-2 Doug Kingsmore Stadium on May 18. Stolz, who was making his first career start at shortstop, lined a two-run homer in the second inning, then Schaus blasted a long two-run long ball in the seventh inning. Kyle Parker added a double, RBI, three runs, two walks, and a hit-by-pitch. Starter Scott Firth pitched 5.1 innings, allowing two runs and no walks with six strikeouts to earn the win.