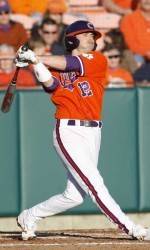 Clemson vs. Elon Clemson (17-2), ranked as high as #5 in the nation, will host Elon (10-9) in a two-game midweek series on Tuesday and Wednesday at Doug Kingsmore Stadium. First pitch for both games is scheduled for 6:30 PM. Both games will be broadcast live on the radio by WCCP (104.9 FM) out of Clemson and can be heard live on the internet at ClemsonTigers.com for both games as well.

The Starting Pitchers In game-one, Elon will start freshman lefthander Dylan Clark (0-1, 10.38 ERA) on the mound. The Manchester, NH native, who will be making his first career start, has made four relief appearances for a total of 4.1 innings pitched. He has allowed eight hits (.364 opponents’ batting average) and two walks with three strikeouts.

The Tigers will counter with freshman righthander Kevin Brady (1-0, 2.92 ERA) on Tuesday. The Gaithersburg, MD native has made four relief appearances and one start for a total of 12.1 innings pitched. He has allowed 13 hits (.271 opponents’ batting average) and four walks with 15 strikeouts.

Both team’s starters for Wednesday’s game have yet to be announced.

The Phoenix Elon, led by 14th-year Head Coach Mike Kennedy, enters the midweek series at #5 Clemson with a 10-9 overall record and a 2-4 SoCon mark after suffering a three-game sweep at home against The Citadel this past weekend. Elon is 3-2 on opponents’ home fields this season.

Matt Hinson is hitting .391 with seven homers and 20 RBIs, while Seth Canipe is batting .379 with seven home runs and 21 RBIs. Ryan Adams has added five long balls and 18 RBIs as well.

The pitching staff has a 6.90 ERA and .326 opponents’ batting average along with 122 strikeouts against 75 walks in 169.2 innings pitched. Freshman righthander Kyle Webb has two of the team’s three saves. Elon is fielding at a .963 clip as well.

The Tigers Clemson, ranked as high as #5 in the nation, enters the midweek series against Elon with a 17-2 overall record and 6-0 ACC mark after sweeping Virginia Tech at home in a three-game series over the weekend. The Tigers sport a 15-0 home record in 2010.

The pitching staff has a 3.47 ERA and .241 opponents’ batting average. The staff has allowed 67 walks against 130 strikeouts, good for a 1.9-to-1 strikeout-to-walk ratio. Sophomore righthander David Haselden has not given up a hit or run in 9.0 innings pitched four three relief appearances and has a 2-0 record and one save. The Tigers are fielding at a .952 clip as well.

Polls The Tigers moved up two spots to #5 in the Sports Weekly coaches poll this week after going 4-1 in five games last week. The Tigers also moved up four spots to #6 in the Collegiate Baseball poll and moved down one spot to #12 in the Baseball America poll. Clemson’s #5 ranking is its highest since June of 2007.

ACC Standings The Tigers are in first place in the ACC Atlantic Division standings with a 6-0 league record. In the division, the Tigers are ahead of second-place Florida State, who is 3-3. Maryland and N.C. State are tied for third in the division with a 2-4 record, while Boston College and Wake Forest are tied for fifth at 1-5. Georgia Tech, Miami (FL), and Virginia are tied atop the Coastal division with a 5-1 record.

Harman Earns National Player-of-the-Week Honor Junior lefthander Casey Harman (South Burlington, VT) was named one of four national players-of-the-week by Collegiate Baseball on March 22. He earned the honor thanks to his stellar outing in Clemson’s 3-0 win over Virginia Tech on March 19. In 7.1 innings pitched, he allowed just one hit and took a no-hitter into the sixth inning against a team that entered the game hitting .354 and averaging over nine runs per game. Harman also allowed no runs and three walks with four strikeouts to earn the victory, while he did not allow a baserunner past second base.

On the season, Harman is 4-0 with a 1.86 ERA and .188 opponents’ batting average in 29.0 innings pitched over five starts as Clemson’s Friday starter. He has also allowed just six runs and 11 walks with 21 strikeouts.

In his three-year career, he is 12-8 with a 3.55 ERA in 159.2 innings pitched over 54 appearances (20 starts). His 4.16 career strikeout-to-walk ratio is second-best in Clemson history, while his 2.09 career walks-per-nine-innings-pitched mark is third-best in Tiger history.

Clemson Sweeps Virginia Tech Clemson, ranked as high as #7 in the nation, swept Virginia Tech by a combined score of 21-10 in a three-game series at Doug Kingsmore Stadium on March 19,20. Clemson upped its home winning streak over the Hokies to 14 games with the sweep. The Tigers outhit the Hokies .309 to .233. Kyle Parker added four hits, including a homer, and five runs. The Tiger pitching staff had a 2.67 ERA, while the three starting pitchers combined to allow just 14 hits and one earned run in 19.1 innings pitched (0.47 ERA).

In game-one on March 19, Casey Harman and Will Lamb led off the third inning with a double and scored on Mike Freeman’s sacrifice fly. The Tigers added one run in the sixth and one run in the eighth, both on bases-loaded walks.

In game-two on March 20, which was the first game of a doubleheader, Lamb pitched 6.0 strong innings to lead Clemson to a 5-2 win over Virginia Tech. Lamb allowed seven hits and one unearned run to earn the win against his home-state team. Alex Frederick pitched the final 3.0 innings to record the save. Clemson outhit the Hokies 12-10, led by Parker’s 2-for-4 performance with a homer and two RBIs. The Hokies stranded 13 runners on base, including nine in scoring position.

In game-three on March 20, which was the second game of a doubleheader, Clemson scored three runs apiece in the second, third, seventh, and eighth innings in its 13-8 victory over Virginia Tech. The Tigers answered with three runs in each of the four innings in which the Hokies scored. Boyd went 3-for-4 with a double, two RBIs, and three runs to lead Clemson’s 13-hit attack. John Nester added four RBIs, while Addison Johnson hit a three-run triple in the second inning. Scott Weismann pitched 6.0 innings with seven strikeouts to earn the win. Jonathan Meyer pitched the final 1.1 innings to record the save.