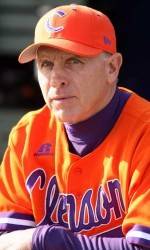 Clemson vs. South Carolina Clemson (7-0), ranked as high as #9 in the country, will face #15 South Carolina (5-2) in a three-game series at three different sites this weekend. Game times are 6:30 PM on Friday at Doug Kingsmore Stadium in Clemson, 2:00 PM on Saturday at Fluor Field in Greenville, and 2:00 PM on Sunday at Carolina Stadium in Columbia. Clemson will be the designated home team on Saturday and occupy the first-base dugout.

The Series Clemson and South Carolina have met 287 times on the diamond, with Clemson holding a 165-120-2 lead in the series dating back to 1899. South Carolina is Clemson’s most-played rival in history.

In 2008, South Carolina won all four matchups. In 2007, South Carolina won the first three meetings before Clemson won the final matchup by a score of 14-5 at Doug Kingsmore Stadium. In the 2006 season, the Tigers won three of four meetings, while the two teams split the four-game season series in both the 2004 and 2005 seasons.

The Starting Pitchers In game-one, South Carolina will start senior righthander Blake Cooper (2-0, 3.00 ERA) on the mound. The Neeses, SC native has made two starts for a total of 12.0 innings pitched. He has allowed seven hits (.175 opponents’ batting average) and four walks with 11 strikeouts.

The Tigers will counter with junior lefty Casey Harman (2-0, 0.84 ERA) on Friday. The South Burlington, VT native has made two starts for a total of 10.2 innings pitched. He has allowed five hits (.132 opponents’ batting average) and four walks with nine strikeouts.

In game-two, the Gamecocks will send out junior righty Sam Dyson (1-0, 2.35 ERA) on the mound. The Tampa, FL native has made two starts for a total of 7.2 innings pitched. He has given up two hits (.080 opponents’ batting average) and two walks with 11 strikeouts.

Clemson will counter with sophomore lefthander Will Lamb (1-0, 1.42 ERA) on Saturday. The Seaford, VA native has made one start and one relief appearance for a total of 6.1 innings pitched. He has yielded five hits (.208 opponents’ batting average) and one walk with three strikeouts.

In game-three, South Carolina will start freshman lefthander Tyler Webb (0-0, 0.00 ERA) on the mound. The Nassawadox, VA native has made one start and one relief appearance for a total of 8.2 innings pitched. He has allowed seven hits (.226 opponents’ batting average) and one walk with nine strikeouts.

The Tigers will counter with sophomore righty Scott Weismann (1-0, 2.89 ERA) on Sunday. The Boxborough, MA native has made two starts for a total of 9.1 innings pitched. He has given up 11 hits (.289 opponents’ batting average) and one walk with 10 strikeouts.

The Gamecocks South Carolina, led by 14th-year Head Coach Ray Tanner and ranked as high as #15 in the nation, enters the series against #9 Clemson with a 5-2 overall record after defeating Presbyterian 15-0 at home on Wednesday. The Gamecocks are also coming off a 1-2 record in a series at East Carolina last weekend. South Carolina is 4-0 at home and 1-2 on the road in 2010.

South Carolina is averaging 7.7 runs per game and hitting .309 with a .486 slugging percentage and .392 on-base percentage. The team has totaled 18 doubles, one triple, eight home runs, and three stolen bases.

The pitching staff has a 2.63 ERA and .217 opponents’ batting average along with 71 strikeouts against 19 walks in 61.2 innings pitched. Junior righthander John Taylor has the team’s lone save. The Gamecocks are fielding at a .985 clip as well.

The Tigers Clemson, ranked as high as #9 in the nation, enters the series against #15 South Carolina with a 7-0 record after topping Dayton 6-5 in 10 innings at home on Wednesday. The Tigers are also coming off a three-game sweep of Wright State at Doug Kingsmore Stadium last weekend. Clemson has a 6-0 record at home and 1-0 neutral-site record in 2010.

The Tigers are averaging 8.4 runs per game and hitting .304 with a .488 slugging percentage and .399 on-base percentage. Clemson has also totaled 17 doubles, nine homers, and 13 stolen bases in 19 attempts.

Kyle Parker is hitting .464 with four homers, 10 RBIs, and nine runs, while Brad Miller is batting .423 with five doubles. Jeff Schaus is hitting .407 with a homer and team-high 11 RBIs.

The pitching staff has a 2.67 ERA and .213 opponents’ batting average. The staff has allowed 17 walks against 50 strikeouts, good for a 2.9-to-1 strikeout-to-walk ratio. Freshman righthander Jonathan Meyer has made a team-high four relief appearances and has one of Clemson’s two saves in 2010. The Tigers are fielding at a .955 clip as well.

Bradley & Price Awards to Be Given After Sunday’s game at South Carolina, Clemson’s MVP of the three-game series will be given the Bob Bradley Award in a ceremony at home plate. Also, South Carolina’s MVP will be given the Tom Price Award. Both Bradley and Price served as Baseball SIDs at their respective schools for decades. Bradley passed away in 2000, while Price passed away in 2008.

In 2009, Parker set the Clemson record for fewest games required to reach 25 career home runs, as he accomplished that feat in only 103 games. He has totaled his 30 career home runs in 127 career games as well.

Parker, who completed his red-shirt freshman campaign on the gridiron in 2009, led the Tigers to a 9-5 record, an appearance in the ACC Championship game, and a win over Kentucky in the Music City Bowl. The signal-caller threw for 2,526 yards on 205-369 passing and added 20 touchdowns in starting all 14 games. He was also a second-team freshman All-American by CollegeFootballNews.com.

Tigers Edge Dayton 6-5 in 10 Innings Doug Kingsmore Stadium on March 3. The Flyers scored three runs in the seventh inning to take a 5-4 lead, then Clemson scored on a wild pitch with two outs in the eighth inning to tie the score. Epps led off the 10th inning with a single. He went all the way around the bases on three wild pitches to give Clemson the win. Kyle Parker went 3-for-5 with a homer and three RBIs to lead Clemson, who outhit the Flyers 13-6. Tomas Cruz, the last of nine Tiger pitchers, earned the win by pitching a scoreless 10th inning.