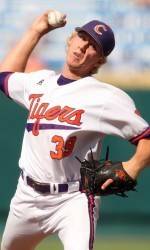 Unbeaten Tigers Face South Carolina Friday With its 6-4 win over #6 Oklahoma on Wednesday, #8 Clemson (45-23) stayed unbeaten in the College World Series and will face #5 South Carolina (50-16) on Friday at 9:00 PM EDT on ESPN2. Sean McDonough, Robin Ventura, and Erin Andrews will call the game on ESPN2.

The Tigers, who are 2-0 in the College World Series, need to beat the Gamecocks once to advance to the Championship Series. If South Carolina tops the Tigers on Friday, the two teams will play a decisive game on Saturday at 7:00 PM EDT on ESPN to determine the winner of the bracket. Clemson will be the designated home team and occupy the third-base dugout on Friday.

Friday’s game will be broadcast live on the radio by Clemson Tiger Sports Network. Live stats will also be available at ClemsonTigers.com.

Clemson vs. South Carolina Series History Clemson and South Carolina have met 290 times on the diamond, with Clemson holding a 167-121-2 lead in the series dating back to the 1899 season. South Carolina is Clemson’s most-played rival in history.

Earlier in 2010, the Tigers won two of the three games, including a 4-3 win at Clemson on March 5 and a 19-6 win in Columbia on March 7. On March 6 at Fluor Field in Greenville, SC, South Carolina rallied late to defeat the Tigers 7-5. The rivalry moved to the three-game format (with games at each team’s home stadium and a neutral-site game) for the first time in 2010.

In 2008, South Carolina won all four matchups. In 2007, South Carolina won the first three meetings before Clemson won the final matchup by a score of 14-5 at Doug Kingsmore Stadium. In 2006, the Tigers won three of four meetings, while the two teams split the four-game season series in both 2004 and 2005.

The Tigers hold a 6-4 lead over the Gamecocks in neutral-site games and a 3-2 lead in NCAA Tourney games. However, South Carolina is 2-0 against Clemson in Omaha, with both wins coming in 2002.

Jack Leggett is 32-30 against South Carolina as Clemson’s head coach, including 0-3 in neutral-site games and 0-2 in NCAA Tournament games. Both losses were in the 2002 College World Series when the two teams were in the exact same situation as they are in 2010. Leggett was also 3-8 against the Gamecocks as Western Carolina’s head coach, meaning he is 35-38 all-time against South Carolina.

Clemson vs. South Carolina 2010 Game Recaps Clemson, ranked as high as #9 in the nation, won two of three games against #15 South Carolina by a combined score of 28-16 at three different sites from March 5-7. It was the first regular-season series win for the Tigers since 2006. Clemson outhit the Gamecocks .286 to .267 and totaled seven home runs. Chris Epps received the Bob Bradley Award as Clemson’s MVP of the series, as he was 7-for-14 with two homers, one double, six RBIs, six runs, and two walks. Mike Freeman added six hits. The Tigers also had a 4.33 ERA.

In game-one at Doug Kingsmore Stadium in Clemson on March 5, Wilson Boyd’s two-out, run-scoring single in the eighth inning lifted the Tigers to a 4-3 victory over South Carolina. The Gamecocks took a 3-2 lead in the sixth inning on Adrian Morales’ sacrifice fly, but Jeff Schaus added solo home runs in the first inning. David Haselden pitched the final 4.0 innings without allowing a hit or run to earn the victory.

In game-two at Fluor Field in Greenville, SC on March 6, Whit Merrifield’s two-out, run-scoring single in the top of the ninth inning gave South Carolina the lead for good in its 7-5 win over Clemson. Merrifield broke a 4-4 tie with his clutch hit, then the Gamecocks added two more run-scoring hits. Freeman’s RBI single in the bottom of the ninth inning brought the potential tying run to the plate, but the Tigers came up short. Jackie Bradley, Jr. went 3-for-4 with a homer and four RBIs to lead the Gamecocks, who outhit Clemson 9-8. Four Gamecock hurlers combined for 13 strikeouts in the game.

In game-three at Carolina Stadium in Columbia, SC on March 7, Clemson hit five home runs to trounce South Carolina 19-6. It was the most runs scored by Clemson against the Gamecocks since 1962 and the Tigers’ largest margin of victory in the series since 1997. Epps’ grand slam in the second inning started the onslaught, as he was 3-for-6 with five RBIs and two runs. Freeman totaled three hits, including a home run, and three runs. Addison Johnson hit a solo homer, and Scott Weismann pitched 6.0 strong innings to earn the win, while eight Gamecock pitchers combined to allow 14 hits and 11 walks.

In the three games against the Gamecocks during the 2010 regular season, Epps was 7-for-14 with two homers, one double, six RBIs, six runs, two walks, and one steal to lead the Tigers to two wins. In the series-finale in Columbia, his grand slam in the second inning started Clemson’s onslaught in its 19-6 win. In that game, he went 3-for-6 with a homer, five RBIs, and two runs.

Worth Noting  Clemson is third in the nation with 77 double plays turned on defense. Southern Mississippi is first (84) and Washington State is second (78).  Friday’s game (June 25) marks the latest date on the calendar that Clemson has ever played a game.  Clemson’s seven wins in the 2010 NCAA Tournament ties the 2002 team for the most wins in a single NCAA Tournament.  Clemson is guaranteed to play at least 11 NCAA Tournament games in 2010, more than any season in school history. Clemson played a school-record 10 NCAA Tourney games in 2002.  Clemson’s two College World Series wins in 2010 ties for the most by the Tigers in history. Clemson also won two games in Omaha in 1996 and 2002.  In the 2009-10 academic year, Clemson had a first-round draft pick in football (C.J. Spiller), men’s basketball (Trevor Booker), and baseball (Kyle Parker). It is only the second time (1986-87 was the other academic year) that the Tigers have had a first-rounder in all three major sports in the same academic year. Clemson also joined Georgia Tech as the only two schools to have a first-rounder in all three sports in 2009-10.

KieboomSpencer Kieboom has started all nine NCAA Tournament games in 2010. In those nine games, Clemson’s opponents have combined for just one stolen base in three attempts. That one steal came by Oklahoma on a ball that was dropped at second base for a would-be caught stealing.

Schaus Jeff Schaus 86 RBIs this season is the third-highest total in Tiger history, trailing only Khalil Greene (91) and Jeff Baker (87) in 2002. Schaus, who is tied for third in the nation in RBIs in 2010, is only three behind Chris Benson (Utah Valley), who is the national leader with 89 RBIs.

Weismann In four career NCAA Tournament starts, Scott Weismann is 4-0 with a 1.73 ERA and .208 opponents’ batting average in 26.0 innings pitched. With his victory against Oklahoma, he also became the first Tiger to total nine wins in a season since 2006, when Jason Berken, Josh Cribb, and Stephen Faris all had nine wins that year.

Tigers Win First Two Games in Omaha In the Tigers’ first game of the College World Series on June 21, Alex Frederick combined to limit #1 Arizona State to three runs and eight hits in Clemson’s 6-3 win. Harman pitched 6.0 strong innings to earn the win, while Frederick pitched 3.0 innings to record the save, as he yielded just one hit, no runs, and one walk with two strikeouts. Clemson outhit the Sun Devils 14-8 and every Tiger starter had at least one hit. The Tigers won their fourth College World Series opener in a row, while it was their 11th all-time win over a top-ranked team and their first since 2006.

In the Tigers’ second game of the College World Series that was suspended on June 22 due to inclement weather and was completed on June 23, Clemson scored four runs in the fourth inning and two runs in the fifth inning to defeat #6 Oklahoma 6-4. Starter Scott Weismann pitched 5.0 innings, allowing just three hits and one run with four strikeouts to earn the win. Frederick recorded the save by pitching a scoreless ninth inning. John Hinson went 3-for-4 with two RBIs and had half of Clemson’s six hits. Spencer Kieboom added a two-run single in the fourth. The Tigers also took advantage of eight walks.