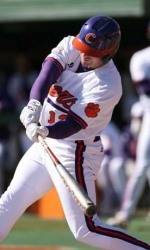 Clemson vs. Michigan State Clemson (7-4), ranked as high as #22 in the nation, will play Michigan State (1-10) on Wednesday night at Fluor Field in Greenville, SC. First pitch is scheduled for 7:00 PM. On Tuesday, the Tigers totaled 15 hits en route to a 15-2 victory over the Spartans at Doug Kingsmore Stadium. Wednesday’s game will be broadcast live on the radio by WCCP (104.9 FM) out of Clemson and can be heard live on the internet at ClemsonTigers.com.

The Starting Pitchers Michigan State will start junior lefthander Kyle Corcoran (0-0, 2.08 ERA) on the mound. The LaGrange, IL native has made three relief appearances for a total of 8.2 innings pitched. He has given up six hits (.182 opponents’ batting average) and seven walks with five strikeouts.

The Tigers will counter with freshman righthander Kevin Brady (0-0, 2.00 ERA) on Wednesday. The Gaithersburg, MD native has made two starts and one relief appearance for a total of 9.0 innings pitched. He has allowed nine hits (.257 opponents’ batting average) and two walks with five strikeouts.

The Series Clemson and Michigan State have met 14 times on the diamond, with the Spartans holding a 9-4-1 lead dating back to the 1935 season. All 14 previous meetings have taken place at Clemson. With Tuesday’s 15-2 win over Michigan State, Jack Leggett is 1-0 against the Spartans as Clemson’s head coach.

Prior to Tuesday’s game, the two teams last met in 1958, when they played twice 10 days apart. Clemson won the first meeting by a score of 7-5 in seven innings on March 24 in the season-opener. That was Bill Wilhelm’s first game as head coach at Clemson. Wilhelm went on to win 1,161 games in 36 seasons (1958-93) at Clemson. The Spartans topped the Tigers in the second and final meeting of the year on April 3 by a score of 3-2. That was Wilhelm’s first loss at Clemson as well. Therefore, Wilhelms’ first-ever win and first-ever loss both came against the Spartans.

The Spartans Michigan State, led by first-year Head Coach Jake Boss, Jr., enters Wednesday night’s game against Clemson with a 1-10 record and has lost 10 games in a row after opening the season with a 4-2 win over Connecticut. The Tigers beat Michigan State 15-2 on Tuesday. It was the first time all year that Michigan State lost a game by more than five runs. The Spartans have yet to play a home game and will not do so until March 20. Michigan State sports a 1-4 record in neutral-site games as well.

Michigan State is averaging 3.7 runs per game and hitting .225 with a .328 slugging percentage and .294 on-base percentage. The team has also totaled 11 doubles, one triple, eight home runs, and 18 stolen bases in 26 attempts.

The pitching staff has a 5.91 ERA and .301 opponents’ batting average along with 49 strikeouts against 54 walks in 91.1 innings pitched. Junior righthander Kurtis Frymier has the team’s lone save. The Spartans are fielding at a .954 clip as well.

The Tigers Clemson, ranked as high as #22 in the nation, enters Wednesday night’s game against Michigan State with a 7-4 overall record and 1-2 ACC mark after topping Michigan State 15-2 at Doug Kingsmore Stadium on Tuesday. Wednesday’s game will mark the Tigers’ first neutral-site game of the season.

The Tigers are hitting .252 with a .361 slugging percentage and .368 on-base percentage. The team has totaled 21 steals, including seven by Addison Johnson. Ben Paulsen is hitting a team-high .400 with one homer and 10 RBIs, while Jeff Schaus is batting .313 with two homers and a team-high 11 RBIs along with a .532 on-base percentage.

The pitching staff has a 2.93 ERA and .212 opponents’ batting average. The staff has allowed 28 walks against 98 strikeouts, good for a 3.5-to-1 strikeout-to-walk ratio. Casey Harman has 14 strikeouts against only two walks in 11.0 innings pitched. The team is fielding at a .970 clip as well.

Worth Noting  Ben Paulsen is 9-for-13 (.692) with three doubles, one homer, seven runs, and seven RBIs in three career games at Fluor Field in Greenville, SC.

Lamb a Dual Threat Freshman Will Lamb (Seaford, VA) came to Clemson as a dual threat in that he was an oustanding outfielder and pitcher at York High School a season ago. He has continued his dual roles as a Tiger in 2009.

In his first significant action on the mound, the lefthander pitched 4.2 innings in relief at #2 North Carolina on March 7. He allowed just one hit (a single) and no runs to keep the Tigers in the game against one of the nation’s best hitting teams. Then in his first career start in the field against Michigan State on March 10, he went 3-for-4 with a walk, two RBIs, and two stolen bases.

On the season, Lamb is 4-for-7 (.571) at the plate with four RBIs and two steals in three games. On the mound, he has allowed just one hit, no runs, and two walks with three strikeouts in 5.2 innings pitched over two relief appearances. His versatility is crucial on the road due to the fact that ACC teams are only allowed to have 25 active players on conference road trips.