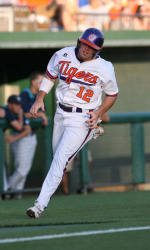 Clemson vs. College of Charleston Clemson (35-17), ranked as high as #14 in the nation, will host College of Charleston (35-16) on Tuesday night at Doug Kingsmore Stadium in the Tigers’ final regular-season home game. First pitch is scheduled for 6:30 PM. The game will be broadcast live on the radio by WCCP (104.9 FM) out of Clemson and can be heard live on the internet at ClemsonTigers.com. The game will also be available live via webcast at ACCSelect.com.

Watch Clemson vs. College of Charleston Live on ACC Select!

The Series Clemson and College of Charleston have met 20 times on the diamond. The Tigers have won all 20 games, including two wins last season. The Tigers won 7-6 in Mount Pleasant on February 29, then Clemson won 12-6 at Doug Kingsmore Stadium on May 13.

The Starting Pitchers College of Charleston will start sophomore righthander Casey Lucchese (1-1, 10.50 ERA) on the mound. The Lexington, KY native has made seven relief appearances and three starts for a total of 18.0 innings pitched. He has allowed 25 hits (.305 opponents’ batting average) and 10 walks with 15 strikeouts.

Clemson will counter with freshman righty Scott Weismann (1-0, 1.27 ERA) on Tuesday. The Boxborough, MA native has made 12 relief appearances and one start for a total of 21.1 innings pitched. He has yielded 15 hits (.197 opponents’ batting average) and six walks with 19 strikeouts.

The Cougars College of Charleston, led by first-year Head Coach Monte Lee, enters Tuesday’s game at #14 Clemson with a 35-16 overall record and 17-10 SoCon mark after sweeping Wofford on the road over the weekend. The Cougars, who are 12-10 on opponents’ home fields, have won 10 games in a row, the longest active streak in the nation.

College of Charleston is one of the nation’s best offensive teams. The Cougars are averaging 10.5 runs per game and hitting .358 with a .620 slugging percentage and .441 on-base percentage. The team has also totaled 145 doubles, 11 triples, 108 home runs, and 111 stolen bases in 137 attempts.

The pitching staff has a 6.30 ERA and .293 opponents’ batting average along with 330 strikeouts against 184 walks in 448.2 innings pitched. Senior lefthander Owen Brittle has a team-high three saves in 25.2 innings pitched over 12 appearances. The Cougars are fielding at a .960 clip as well.

The Tigers Clemson, ranked as high as #14 in the nation, enters Tuesday’s game against College of Charleston with a 35-17 overall record and 16-11 ACC mark after topping Furman 8-5 at Fluor Field in Greenville, SC on Monday. The Tigers also won two of three games against UNC Wilmington at home over the weekend. The Tigers are 26-8 at home as well.

The pitching staff has a 3.57 ERA and .250 opponents’ batting average. The staff has allowed 155 walks against 434 strikeouts, good for a 2.8-to-1 strikeout-to-walk ratio. Tomas Cruz and Matt Vaughn are tied for the team-lead with three saves apiece. The Tigers are fielding at a .968 clip as well.

Polls The Tigers moved up five spots to #14 in the Sports Weekly coaches poll this week after going 2-1 in three games last week. Clemson also moved up two spots to #17 in the Collegiate Baseball poll and moved up one spot to #19 in the Baseball America poll.

Boyd Streaking Junior outfielder Wilson Boyd (Hickory, NC) had a streak of seven consecutive hits over a two-game span on May 10,11. He went 3-for-3 against North Carolina-Wilmington on May 10, then he had a hit in each of his first four at-bats against Furman a day later before he grounded out in his fifth at-bat of the game. He also went 2-for-3 against the Seahawks on May 9, meaning he is 9-for-11 in the last three games.

Tigers Outlast Furman 8-5 at Fluor Field Ben Paulsen both tallied four hits to lead #14 Clemson to an 8-5 victory over Furman at Fluor Field in Greenville, SC on May 11. The Tigers jumped out to a 5-0 lead thanks to Boyd’s three-run double in the first inning and Paulsen’s two-run homer in the third. The Paladins scored four runs in the eighth but got no closer. Boyd went 4-for-5 with a double, triple, three RBIs, and two runs. Justin Sarratt retired all four batters he faced to record his first career save.