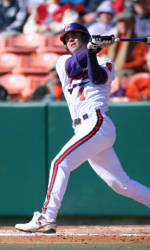 Clemson vs. College of Charleston Clemson (26-25-1) will play host to College of Charleston (34-17) on Tuesday at Doug Kingsmore Stadium in the Tigers’ final home game of the regular season. First pitch is scheduled for 7:15 PM. The game will be shown live via webcast at ClemsonTigers.com.

Watch Clemson vs. College of Charleston Live on ACC Select!

The 13-year-old daughter of Cougar Head Coach John Pawlowski was stricken with a rare form of cancer last year. She has undergone numerous treatments, including a recent surgery where doctors removed a tumor. She is scheduled to be at Doug Kingsmore Stadium on Tuesday night for the presentation.

In February, the Clemson Baseball Office initiated the Mary Louise Pawlowski Fund to raise money for her medical costs. Prior to the Tigers’ game at College of Charleston on February 29, Head Coach Jack Leggett presented Mary Louise with several Tiger memorabilia items, including a purple #43 jersey. Her father wore that number as pitching coach at Clemson under Leggett from 1994-98. He also was a standout pitcher at Clemson from 1983-85. Mary Louise was born in the Clemson area while her father was an assistant coach in Tigertown.

As the Tigers did on February 29, they will wear purple jerseys on Tuesday against the Cougars. Purple is Mary Louise’s favorite color.

The Series Clemson and College of Charleston have met 19 times on the diamond. The Tigers have won all 19 games, including a 7-6 victory at Patriots Point Stadium on February 29, 2008. In that game, Clemson hit three home runs, while J.D. Burgess’ eighth-inning double that scored two runs gave the Tigers a one-run victory. Doug Hogan, Ben Paulsen, and Kyle Parker totaled three hits apiece as well.

The Tigers were victorious 19-7 over the Cougars at Doug Kingsmore Stadium during the 2007 season, the only meeting that year. The Tigers hit four home runs in the contest, including one each by D.J. Mitchell, Hogan, and Burgess. The Tigers also scored 10 runs in the fourth inning en route to the 12-run victory.

The Starting Pitchers College of Charleston will start junior righty Clay Caulfield (4-2, 6.90 ERA) on the mound. The Toronto, Ontario native and former Clemson signee has made nine starts and two relief appearances for a total of 44.1 innings pitched. He has allowed 53 hits (.306 opponents’ batting average) and 22 walks with 33 strikeouts.

Clemson will counter with junior righthander Matt Vaughn (1-2, 3.37 ERA) on Tuesday. The Summerville, SC native, who last started on March 27, 2007 against Gardner-Webb, has made 26 relief appearances for a total of 34.2 innings pitched this season. He has allowed 35 hits (.263 opponents’ batting average) and 11 walks with 38 strikeouts.

The Cougars College of Charleston, led by ninth-year Head Coach John Pawlowski, enters Tuesday’s game at Clemson with a 34-17 overall record and 16-8 Southern Conference mark after sweeping Wofford over the weekend by a combined score of 40-8. The Cougars are 9-9 on the road this season.

The Cougars are hitting .334 with a .438 on-base percentage and are averaging 10.6 runs per game. They have totaled double-digit runs 25 times in 2008, including each of the last five games. The team has also totaled 141 doubles, 16 triples, and 106 home runs, good for a .600 slugging percentage. The Cougars have amassed 43 sacrifice bunts and 70 stolen bases in 91 attempts as well.

The pitching staff has a 6.12 ERA and .296 opponents’ batting average. Righthander Jesse Simpson has six saves along with 63 strikeouts in 53.0 innings pitched over a team-high 20 appearances. The team is fielding at a .963 clip as well.

The Tigers Clemson enters Tuesday’s game against College of Charleston with a 26-25-1 overall record and 11-18-1 ACC mark after winning one of three games at #25 Georgia Tech over the weekend. Clemson has a 17-13 home record as well.

Doug Hogan has totaled 15 doubles, three triples, 11 homers, and 51 RBIs on the season.

The pitching staff has a 4.77 ERA and .288 opponents’ batting average. Righthander Matt Vaughn has struck out 38 against 11 walks in 34.2 innings pitched and has nine saves in 26 relief appearances. The Tigers are fielding at a .966 clip as well.

Georgia Tech Takes Two From Tigers Georgia Tech, ranked #25 in the nation, won two of three games against Clemson at Russ Chandler Stadium from May 9-11. Both teams scored 18 runs in the series, while Georgia Tech outhit the Tigers .353 to .304. Jeff Schaus went 6-for-13 (.462) with two doubles and four RBIs, and Mike Freeman went 6-for-14 (.429) with four runs scored. Tiger pitchers combined for 26 strikeouts against four walks. Clemson also committed just one error in the series.

In game-one on May 9, David Duncan pitched 8.0 strong innings to lead Georgia Tech to a 5-1 victory over Clemson at Russ Chandler Stadium. Duncan allowed six hits, one run, and no walks with five strikeouts to record the win. Kyle Parker hit an opposite-field home run in the sixth inning for the Tigers’ lone run. Parker and Freeman tallied two hits apiece. Charlie Blackmon and Tony Plagman had three hits apiece for Georgia Tech, who totaled 14 hits in the contest.

In game-two on May 10, Eddie Burns pitched 8.0 solid innings to lead Georiga Tech to a 7-1 win over Clemson at Russ Chandler Stadium. Burns yielded seven hits, one run, and no walks with three strikeouts to earn the victory. The Tigers had 11 baserunners, but they could only plate one run. The Yellow Jackets scored four runs in the fourth inning to take a 5-0 lead and coasted to the six-run win. Clemson’s lone run came on Parker’s RBI groundout in the eighth inning. Luke Murton went 2-for-4 with two RBIs to pace Georgia Tech’s 10-hit attack. John Hinson went 3-for-4 for Clemson, who totaled eight hits.

In game-three on May 11, eight Tigers had at least two hits in Clemson’s 16-6 victory over Georgia Tech at Russ Chandler Stadium. Schaus went 5-for-6 with four RBIs to lead the Tigers’ 20-hit attack. Ben Paulsen added two of Clemson’s five doubles, as the Tigers totaled seven extra-base hits in the contest. Every Tiger starter had a hit and scored a run by the end of the sixth inning. Wilson Boyd hit a three-run home run in the sixth inning, then the Tigers added six runs on five hits in the ninth inning. Starter Trey Delk pitched 5.2 innings, allowing three hits, two runs, and one walk with four strikeouts to earn the win.