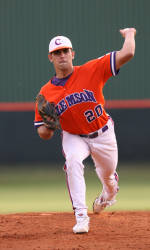 Tuesday’s game against Coastal Carolina will be shown live via webcast at ClemsonTigers.com for both games.

The Series (Coastal Carolina) Clemson and Coastal Carolina have met 42 times on the diamond, with the Tigers holding a 36-6 lead in the series dating back to 1986. The two teams have played at least one game every season since 1988 with the exception of 2006.

The Tigers defeated the Chanticleers three times in 2007, including on March 7 at Doug Kingsmore Stadium by a score of 4-0. In June, Clemson played in the Myrtle Beach Regional and faced host Coastal Carolina twice. The Tigers won both games by scores of 11-8 and 15-3.

The Tigers are 26-4 against Coastal Carolina in games played at Clemson (all at Doug Kingsmore Stadium) and 23-4 under Jack Leggett.

The Series (Furman) Clemson and Furman have met 193 times on the diamond, with the Tigers holding a 132-57-4 advantage dating back to the 1896 season. Clemson’s first two games in school history were against the Paladins, both losses in 1896, which were the Tigers’ only games that season. The two teams have played at least one game every year since 1983.

The Starting Pitchers (Coastal Carolina) Coastal Carolina will start junior righthander David Anderson (3-0, 1.86 ERA) on the mound. The Lexington, SC native had made two starts and one relief appearance for a total of 19.1 innings pitched. He has allowed 23 hits (.299 opponents’ batting average) and six walks with four strikeouts. He has also not allowed a home run this season.

The Tigers will counter with sophomore lefty Matt Zoltak (2-0, 6.43 ERA) on Tuesday. The Philadelphia, PA native has made one start and six relief appearances for a total of 14.0 innings pitched. He has yielded 19 hits (.317 opponents’ batting average) and five walks with 10 strikeouts.

The Starting Pitchers (Furman) Furman will start sophomore righthander Justin Holloway (1-1, 4.63 ERA) on the mound. The Duluth, GA native and Georgia transfer has made two starts and two relief appearances for a total of 11.2 innings pitched. He has yielded 14 hits (.304 opponents’ batting average) and eight walks with six strikeouts.

The Tigers will counter with freshman lefthander Craig Gullickson (1-0, 2.38 ERA) on Wednesday. The Palm Beach Gardens, FL native has made two starts and three relief appearances for a total of 11.1 innings pitched. He has allowed 11 hits (.256 opponents’ batting average) and three walks with eight strikeouts.

The Chanticleers Coastal Carolina, led by 13th-year Head Coach Gary Gilmore, enters Tuesday’s game with a 15-2 overall record after splitting two games against #25 Michigan over the weekend. The Chanticleers’ only other loss came at College of Charleston on February 26. Coastal Carolina, who is ranked as high as #21 in the nation and has a 1-1 road record, defeated #3 North Carolina in Chapel Hill by a score of 11-4 on March 11.

Dock Doyle leads the team with a .426 batting average along with five homers and 20 RBIs. Adam Rice is hitting .386 with four homers, 13 RBIs, and nine stolen bases. Freshman Scott Woodward has a .506 on-base percentage thanks to 14 walks and 10 hit-by-pitches along with 17 steals in 18 attempts.

The pitching staff has a 3.97 ERA and .276 opponents’ batting average along with 116 strikeouts against 55 walks in 156.1 innings pitched. Pete Andrelczyk has three of the team’s six saves. The team is fielding at a .977 clip as well.

The Paladins Furman, led by 15th-year Head Coach Ron Smith, enters Wednesday’s game with a 10-5 overall record after winning two of three games against High Point over the weekend. The Paladins, who are 1-3 on the road, have not lost a game this season when leading at the end of any inning.

Joey Rodgers is hitting .366 with three homers and six RBIs, and he has stolen seven of the team’s 10 bases this season. Campbell Lewis is hitting .340 with a team-high 13 RBIs. Lewis and Bobby Hubbard are the only Paladins to start every game in 2008.

The pitching staff has a 3.94 ERA and .270 opponents’ batting average along with 105 strikeouts and 45 walks in 128.0 innings pitched. In 10.0 innings pitched over eight relief appearances, righthander Nick Karow has allowed just five hits, no runs, and two walks with 10 strikeouts. He also has a team-high two saves. The Paladins are fielding at a .975 clip as well.

The Tigers Clemson enters this week’s action with a 10-6 overall record and 2-4 ACC mark after falling twice in three games against Boston College over the weekend. The Tigers have an 8-3 home record and are in the midst of a 12-game homestand. Ten of Clemson’s 16 games this year have been decided by two runs or less as well.

The pitching staff has a 4.91 ERA and .282 opponents’ batting average. Freshman lefthander Casey Harman has a 2.25 ERA and 13 strikeouts against only one walk in 12.0 innings pitched over seven appearances (one start), while Matt Vaughn has five saves. The team is fielding at a .962 clip as well.

Worth Noting  The Tigers have a 2-4 ACC record, but they have lost their four league games by a combined seven runs.

Polls Clemson dropped out of the Sports Weekly poll on Monday after going 3-2 in five games last week.

Offensive Numbers Up When Clemson lost the likes of Brad Chalk, Andy D’Alessio, Taylor Harbin, and Marquez Smith after the 2007 season, many thought the Tigers’ offensive numbers would decline in 2008. But that has not been the case.

In 2008, the Tigers have totaled 63 extra-base hits in 16 games, nearly four per game, including 36 doubles, four triples, and 23 home runs. If the season ended today, Clemson’s .523 slugging percentage would be third-best in school history. Clemson is also averaging 7.9 runs per game and hitting .327 with a .402 on-base percentage.

Freshman Southpaws Similar in Many Ways Craig Gullickson (Palm Beach Gardens, FL) and Casey Harman (South Burlington, VT) come from vastly different parts of the country, but both have many things in common. Both are freshman lefthanders, and both have been versatile in that they have provided innings out of the bullpen as long relievers and both have given the Tigers spot starts in weekday games.

Boston College Edges Clemson Twice Clemson, ranked #24 in the nation, lost two of three games against Boston College from March 14-16 at Doug Kingsmore Stadium. The Tigers outscored the Eagles 26-15 and outhit Boston College .351 to .250. Wilson Boyd went 10-for-16 (.625) with two doubles, a triple, six RBIs, and four stolen bases in the series. Clemson also had a 2.67 ERA and struck out 27 against just four walks in the series, but it committed five errors that led to seven unearned runs and two losses by a combined three runs.

In game-one on March 14, Tony Sanchez’s two-run homer in the seventh inning lifted Boston College to a 6-4 victory over Clemson at Doug Kingsmore Stadium. The Tigers held a 3-2 lead entering the seventh inning, but a costly throwing error on a routine groundball and a two-out flyball that fell for a run-scoring double preceded Sanchez’s long ball. Clemson outhit the Eagles 12-8, stole four bases, and had 15 batters reach base, but the Tigers hit into three double plays. Eagle starter Terry Doyle scattered 10 hits in 6.0 innings pitched to earn the win. Tiger starter Doug Hogan added two hits and two RBIs.

In game-two on March 15, Boston College scored five runs in the final two innings and held on for a 7-6 victory over Clemson at Doug Kingsmore Stadium. The Tigers scored three runs in the first two innings, but the Eagles scored the game’s next seven runs. Garret Smith’s two-out, run-scoring single in the eighth inning put Boston College ahead for good. After the Eagles added three insurance runs in the top of the ninth inning, Boyd hit a two-run triple and Hogan hit a run-scoring single in the bottom of the ninth inning, but the Tigers fell one run short. Michael Belfiore went 3-for-5 with four RBIs to pace the Eagles, who outhit Clemson 12-9. Jeff Schaus was 3-for-4 to lead the Tigers. Clemson committed three errors that led to four unearned runs.

In game-three on March 16, Clemson scored seven runs in the first inning and nine runs in the sixth inning in its 16-2 victory over Boston College at Doug Kingsmore Stadium. The Tigers’ eight-hit first inning was highlighted by Kyle Parker two-run homer. Parker was 2-for-3 with four RBIs, while Boyd went 5-for-6 with two doubles and two RBIs to lead Clemson’s 19-hit attack. Twelve different Tigers had at least one hit and 11 scored at least one run. Starter Graham Stoneburner allowed three hits, one run, and no walks with eight strikeouts in 6.0 innings pitched to earn the win.